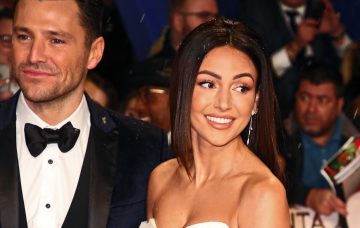 Former TOWIE cast member Mark Wright has revealed Michelle Keegan was “over the moon” when he told her he was quitting America.

The 31-year-old told The Sun his actress wife burst into tears when she found out he would be moving home, reuniting the couple after two years flying back and forth across the Atlantic.

Mark also hinted ex Corrie star Michelle had wanted him to return from Los Angeles ahead of his departure from entertainment news show Extra – but didn’t want his decision to give up the role to be influenced by her.

Insisting he knew he couldn’t live in the US forever because of their relationship, Mark gushed how Michelle had been key to his success.

Essex boy Mark continued: “She always supported my decision and never once asked me to come home. When I told her, she cried with happiness.”

He was also adamant in stating he had ‘no regrets’ about leaving his dream job. His next gig sees Mark hosting The Bachelor UK.

Mentioning his career move would not have been possible if they were parents, Mark also joked Our Girl actress Michelle was set to have their child.

He continued: “Seriously, we will have kids one day, touch wood, if we can. Just not right now. I’m 32 now and she’s coming up to 32, so it will have to happen within the next few years.”

As well as laying out a loose schedule for starting a family, mark also recently commented on pal Arg’s on-off relationship with Gemma Collins.

Speaking on Heart Radio Mark said he had seen a snap of his TOWIE castmate leaving The GC’s apartment and suggested that meant they haven’t split.

“So they’re probably still together,” he reflected.

Yes I was drunk, yes I loved every second, yes the fall grazed my whole leg, yes it was dangerous !! Oh well YOLO !! What a buzz !! “The bachelor UK” This Monday 10pm on Ch 5🌹🌹🌹🌹 . #banter #laughs #ski #pants #thebacheloruk #lovelife❤️

– The Bachelor UK airs on Channel 5, Mondays at 10pm