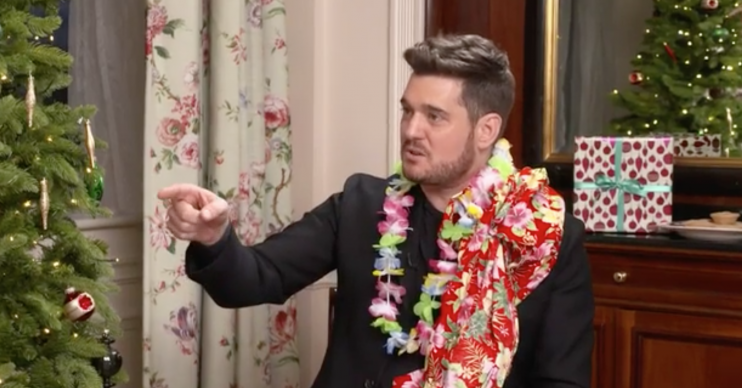 The duo have their first tiff…

The Canadian singer appeared in a pre-recorded segment with Alison and jokingly called the presenter the b-word not once but twice.

We expect the huge Christmas fan is on the naughty list now!

Playing a game of Bublé’s Baubles, Alison asked the singer a series of Christmas-themed questions, quizzing him about his favourite Christmas song.

He revealed it was All I Want For Christmas Is You – a song that he has covered.

However, when Michael turned interviewer and asked Alison the same question, he didn’t quite get the answer he was hoping for, as she revealed she preferred the Mariah Carey version of the song.

She said: “Would you mind if it’s not one of yours?”

“Are you sure? It’s got to be Mariah Carey, All I Want For Christmas Is You,” Alison said.

As Alison brought out the mistletoe in the hope of a kiss from the heart-throb, he said he sadly had to decline.

I want to kiss you, I do, but I’m not going to go through this again.

He explained: “Do you remember what happened last time? You don’t. Because you got to go off and live your life and I had to go home and have my wife ask who that [bleep] was.”

He added: “You deal with her,” before revealing that Luisana said: “It’s not you, Mike, I trust you.”

Michael and Alison then had their very first tiff as she revealed that she’s never been to one of his shows.

“Is this our first tiff?” Alison asked.

“No,” a sulky-looking Bublé said.

The singer also revealed that he prefers trifle to mince pies, which he thinks are “posh”.

Earlier on in the month Alison interviewed Mariah Carey with similar hilarious results.