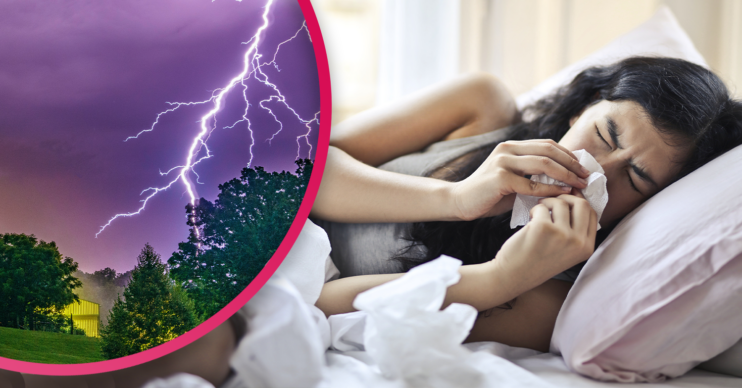 'Thunder fever' to hit the UK?

The Met Office has issued a weather warning as ex-tropical Storm Alex heads our way, bringing misery for hay fever sufferers with it.

High winds and thundery downpours are expected over the next couple of days for many Brits.

And the winds could lead to a phenomenon known as “thunder fever” for those who usually suffer from allergies.

The next few days look wet and windy for those living in the north of UK, with thunderstorms expected on Friday (June 10) and Saturday (June 11).

It’ll be a clear case of a north/south divide, though, with those living closer to the capital due to bask in highs of 23˚C.

The unseasonable weather is a result of ex-tropical Storm Alex making its way across the Atlantic.

Met Office meteorologist Rebekah Sherwin explained: “By the time the system that was Tropical Storm Alex gets near UK shores, it will have transitioned into a mature Atlantic low.

“Although no longer a named storm, it will bring some unseasonably strong winds across the northern half of the UK – especially to the northwest on Friday and Saturday.”

Winds are likely to reach 45mph for many areas of the north.

Meanwhile, gusts in excess of 55mph could be expected in exposed and coastal areas.

And it’s these winds that could spell trouble for hay fever sufferers.

Cases of ‘thunder fever’ to hit the UK?

Airborne allergens expert Max Wiseberg told the Daily Star: “With this fine weather thunderstorms are also predicted, and they can bring problems for hay fever sufferers.

Thunderstorms can cause a phenomenon known as ‘thunder fever’.

“Very high pollen counts are predicted across many parts of England from Thursday onwards. This will cause havoc for the millions of hay fever sufferers in the UK.

“Predicted thunderstorms won’t give respite, as instead they can cause a phenomenon known as ‘thunder fever’.”

Thunder fever occurs when there are both thunderstorms and a high pollen count.

It can be fatal in some cases.