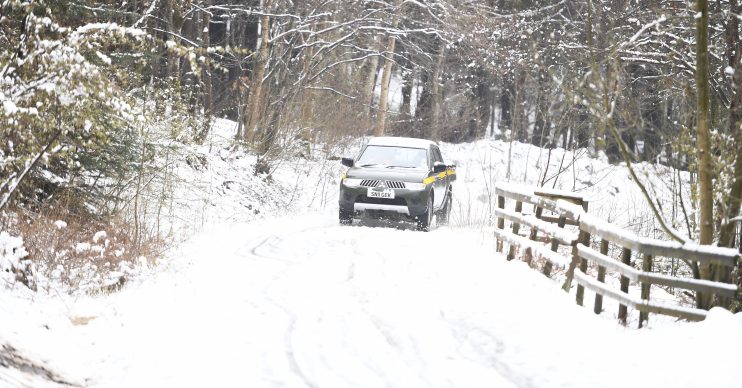 The Met Office has issued a yellow snow warning as up to four inches of snow is predicted to fall.

A wind and snow alert is in place for Scotland and Northern Ireland as Storm Ciara hits the UK next week.

The Met Office says: “Heavy snow and strong winds will combine to lead to disruption to travel , especially over higher routes.

“There is a chance of travel delays on roads with some stranded vehicles and passengers, along with delayed or cancelled rail and air travel.

Heavy snow and strong winds will combine to lead to disruption to travel , especially over higher routes.

“Some short term loss of power and other services is possible. It’s likely that some coastal routes, sea fronts and coastal communities affected by spray and/or large waves.

“Delays for high-sided vehicles on exposed routes and bridges likely.”

The warning also states: “Frequent and heavy snow showers will affect the region throughout Monday and at first on Tuesday. Snow showers will mainly be over high ground.

⚠️
A #wind and #snow warning has been issued for parts of Northern Ireland and Scotland for Monday and Tuesday.
⚠️

Meanwhile, there are yellow wind and rain warnings for most of the country this weekend.

⚠️ Yellow Weather Warning issued ⚠️#StormCiara will bring heavy #rain, with a warning now issued from 0000 to 2100 hours on Sunday for higher ground areas in the west

Read more: Asda releases £15 Disney bedding sets for kids and they are adorable

Frank Saunders, Chief Meteorologist at the Met Office, said: “An extremely strong jet stream will steer a succession of low-pressure systems towards the UK over the next week, starting with Storm Ciara this weekend.

“Our confidence in the forecast means we have been able to issue severe weather warnings well in advance, giving people time to prepare for potential impacts of the storm.”

“The Met Office will continue to monitor the development of Storm Ciara and other potentially impactful low-pressure systems through next week.

“Warnings will be issued and amended as appropriate so members of the public should keep up to date with the Met Office forecast via our website, app or by following us on social media.”