Britain will experience heavy rain and thunderstorms this weekend after the hottest August Bank Holiday on record.

The Met Office has issued yellow weather warnings for parts of the UK on Friday (August 30) and Saturday (August 31).

It's been said there will be "spells of heavy rain" across the northwest of the UK and Northern Ireland.

The #rain warning for #Scotland has now been expanded to cover much of central and western Scotland, and extended longer into the afternoon on Saturday. #WeatherAware pic.twitter.com/HHt3WLqzXe

The warnings are in place from 12pm on Friday to 3pm on Saturday.

We're expecting to see some spells of heavy rain across northwest UK as well as Northern Ireland.

"We're set to see some heavy rain at home. We advise people in the affected areas to take care as there is risk of surface water flooding and possibilities of travel disruption."

The Met Office says for Friday: "Much of England and Wales will be dry and warm with sunshine. The north will be windy with rain, heavy and persistent in parts of Northern Ireland and western Scotland." 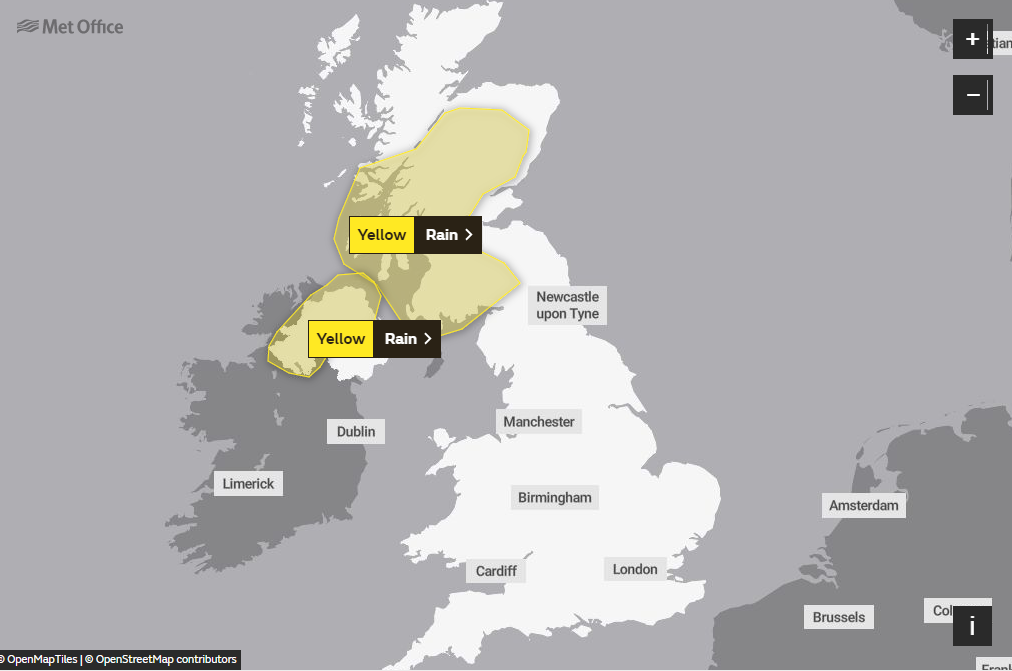 Warnings are in place Friday and Saturday (Credit: Met Office)

For Saturday and the rest of the weekend, the weather service predicts: "Unsettled across the north, with heavy rain on Saturday and showers on Sunday.

"Drier and brighter in the south, with rain moving east on Saturday. Cooler Generally."

The Met Office's official Twitter account shared on Thursday: "Tomorrow's weather front is an example of a 'conveyor belt' of rain, which brings a continuous feed of rain to the same places over a long period of time."

Tomorrow's weather front is an example of a 'conveyor belt' of rain, which brings a continuous feed of rain to the same places over a long period of time #WeatherAware #ThursdayThoughts pic.twitter.com/ISlAGtPDJv

Bala in Snowdonia National Park was the warmest place in Wales, as temperatures reached 25.5C.