A "potential risk to life and property" warning has been issued in parts of Britain as torrential rain and storms continue to batter the country.

The Met Office put out the alert for parts of Scotland today as heavy rain could potentially flood homes and businesses.

It's been said that the southeast of Scotland could see up to 10cm of rain.

Amber and yellow warnings are also in place for parts of Scotland, North Wales and the North West and North East of England.

Amber and yellow warnings are in force for Thursday morning.

The Met Office tweeted today: "Amber and yellow warnings are in force for Thursday morning, so conditions on the roads will be treacherous for some with surface water flooding and intense rainfall #WeatherAware."

Meanwhile, the Environment Agency has issued 49 flood alerts for England. They have said that flooding is possible.

Amber and yellow warnings are in force for Thursday morning, so conditions on the roads will be treacherous for some with surface water flooding and intense rainfall #WeatherAware pic.twitter.com/Vzqpp7q7on

North Wales Police also tweeted: "Assess the need for your journey, drive to the conditions and your driving ability. Please DO NOT ignore any road closure signs. Think safety."

A Met Office amber warning - which is the second highest level of severity - has said train and bus cancellations are likely due to the intense downpours.

There is also a "good chance" that some communities will be cut off by flooded roads.

People have also been warned that power cuts and loss of other services to some homes and businesses are likely. 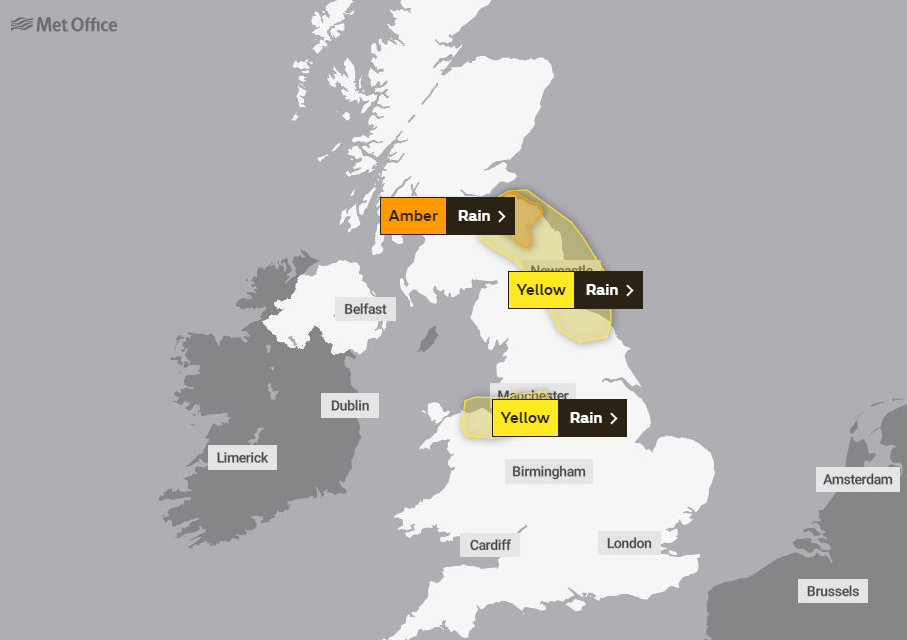 A "danger to life" warning has been issued in parts to Britain (Credit: Met Office)

Read more: Hail and thunder predicted as miserable conditions set to get WORSE

The Met Office said: "Heavy rain will develop during late Wednesday evening and the early hours of Thursday and then gradually start to ease later on Thursday morning.

"30 to 50 mm is likely to fall quite widely and over higher ground in southeast Scotland and northern Northumberland 80 to 100 mm rain may fall in a few places."

The forecast added that up to 40mm of rain is expected over high ground in North Wales.

Are you ready for this extreme weather? Leave us a comment on our Facebook page @EntertainmentDailyFix and let us know what you think!