Britain is braced for floods and winds this weekend and it's going to cause disruption for many.

According to the Met Office, the unsettled weather will cause chaos across the country.

The weather forecaster has also issued a "severe" warning for wind covering the South of England and South Wales on Saturday. 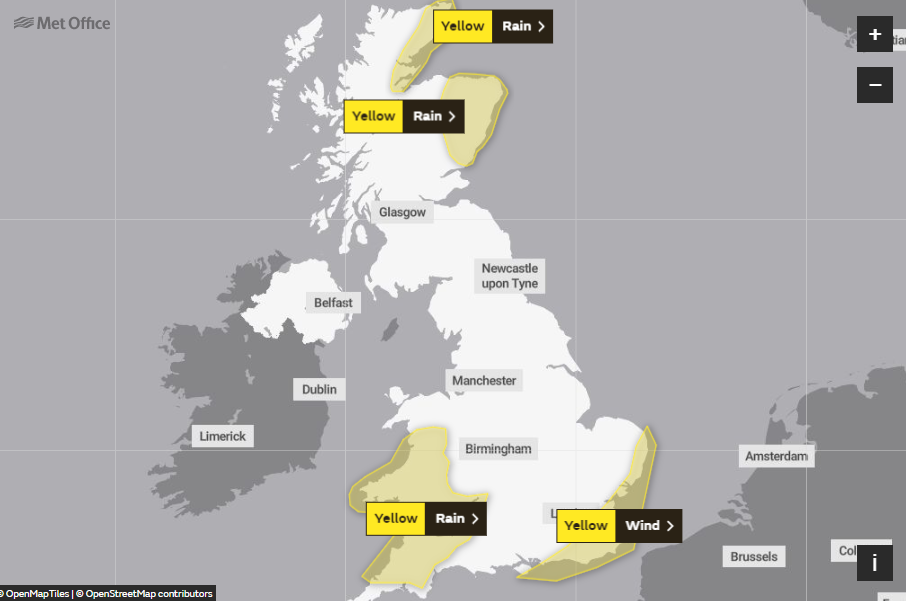 The Met Office has also issued a "danger to life" warning as flying debris and large waves could hit.

Met Office meteorologist Alex Deakin told The Sun: "The strength of the wind on Saturday could cause some disruption."

The strength of the wind on Saturday could cause some disruption.

He added that Brits should prepare for "more wet and windy weather this weekend".

Meanwhile, the Environmental Agency have seven flood warnings in place with 69 flood alerts.

A band of heavy rain will sweep across the country on Saturday night along with "some very strong and gusty winds".

Heading out this #SaturdayAfternoon?

🌧️⛅️ Rain is possible elsewhere too, but some areas will see the sunshine as well pic.twitter.com/yY0YC8GmIM

The Met Office warns that northern areas will also see some mist with "murky" conditions.

There are also warnings in place for tomorrow (November 3) in Scotland.

It comes after it was claimed snow could hit Britain this month.

According to some forecasters, a chance of snow is possible over hills of Scotland next week.

Met Office spokesman Oli Claydon told the Express: "After the weekend, unfortunately it looks like another low pressure is going to come in on Monday.

"As this low moves to the south it will bring cold Polar air down from the north, overnight temperatures will be low.

"Snow is not out of the question over the hills of Scotland through the start of next week."