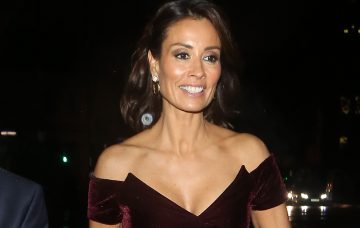 Melanie Sykes had some choice words about British men and Celebrity Juice host Keith Lemon got roped into it.

The presenter, 50, took aim at the ITV2 character, blaming him for men’s limited vocabulary.

Melanie, who has previously been married twice, has enjoyed romances with a number of famous faces including Olly Murs and Jamie Theakston.

Who is Melanie Sykes dating?

In her latest interview, the gorgeous star opened up about the harsh realities of trying to find herself a partner.

“Sadly most men are pretty basic and disappointing,” she told Frank Magazine.

“I feel sorry for British men who have adopted the limited vocabulary of character Keith Lemon when talking to women.

The mum-of-two, who split from comedian Steve Coogan last year, has previously appeared on Celebrity Juice alongside Keith.

Keith is played by comedian Leigh Francis, who back in June was forced to apologise over a race row.

“I would be surprised, and indeed it would be a miracle if any of these men are actually getting laid,” she added.

This isn’t the first time Melanie has revealed her frustrations towards the male population.

Melanie’s on a feminist mission

She previously said that she feels as if she is always having to call the opposite sex out for their behaviour.

“I feel like I’m constantly having to educate men about how to behave around women.

“I relish it. If I don’t tell them, they’ll go on and do it to some other poor woman,” the former Blind Date star told Fabulous Magazine.

“So next time he even thinks about saying that to another woman he might decide not to after getting an ear-bashing from me.

The feisty star continued: “I don’t go around being an absolute bitch to men, but you can be firm.

“I don’t want to feel uncomfortable because of someone else – why should I?”