It wasn't so long ago that a nasty family feud meant that Spice Girl Melanie Brown hadn't seen her own sister for years.

Now, in much happier times, the pair are back in contact and Mel has just met her niece for the first time.

Auntie duties,I’m in heaven with my sisters baby yippeee it’s mine now @missdaniellebrown first time meeting her and I’m sooooo In love with her!!

In a super cute video shared with her 1.5million Instagram followers, 'Scary Spice' revealed she was "so in love".

She said: "Auntie duties, I'm in heaven with my sister's baby yippeee. It's mine now @missdaniellebrown - first time meeting her and I'm sooooo in love with her!"

In the snippet of footage, 44-year-old Mel can be seen giving her niece a kiss on the top of her head. 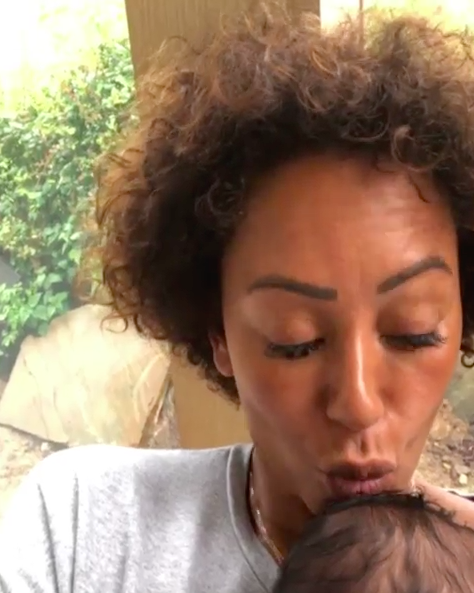 Mel B told fans she was "in love" with her niece (Credit: Instagram @officialmelb)

Danielle's good friend Kerry Katona was one of the first to respond, posting: "Awwww I need some more cuddles."

Auntie duties, I'm in heaven with my sister's baby yippeee.

Another posted: "Loving the sisterly love. Sending love to all the Browns."

In fact, the siblings didn't speak for a decade and Mel only recently reunited with her younger sister Danielle Brown and her mum.

Speaking on This Morning to discuss the rift that tore their family apart and left Mel "isolated" from her family for 10 years, Mel said that her former husband Stephen Belafonte was "very controlling".

She claimed he texted and emailed her family pretending to be her, saying that she didn't want any contact with them.

Mel said: "I was in a 10-year marriage and it wasn't a nice marriage at all and I got isolated from my friends and family."

Danielle revealed that, although they spoke to Mel at the beginning of her marriage, that didn't last "for long". 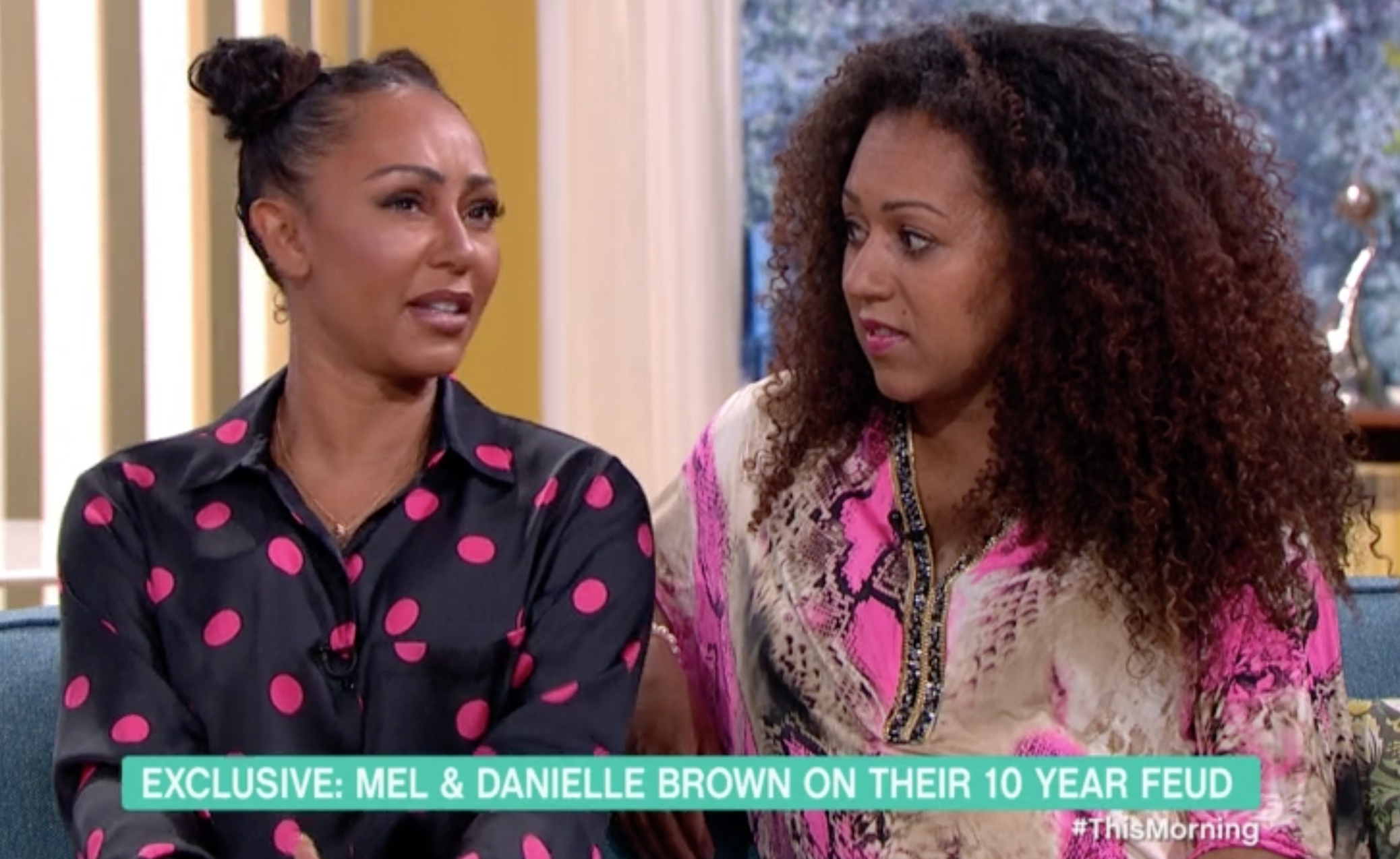 Mel B and her sister Danielle appeared on This Morning to discuss their 10-year rift (Credit: ITV)

She said: "A lot of the close friends and people who always worked for you kind of got pushed to one side and then we were the last ones to go, me, my mum and my dad."

Mel explained: "Because I lived in LA, my trips back to Leeds got less and less and less because my then-husband was very controlling and it was very mean that he did that to our family."

Holly asked Mel about a phone call after the couple's vow renewal ceremony in Egypt, where she called to tell her mum and sister that she didn't want any more contact.

Revealing that they weren't even her words, Mel said: "It's a thing of if I don't say it like this there's going to be a big argument and fight and I didn't want that to keep on happening, even though it did happen constantly for 10 years." 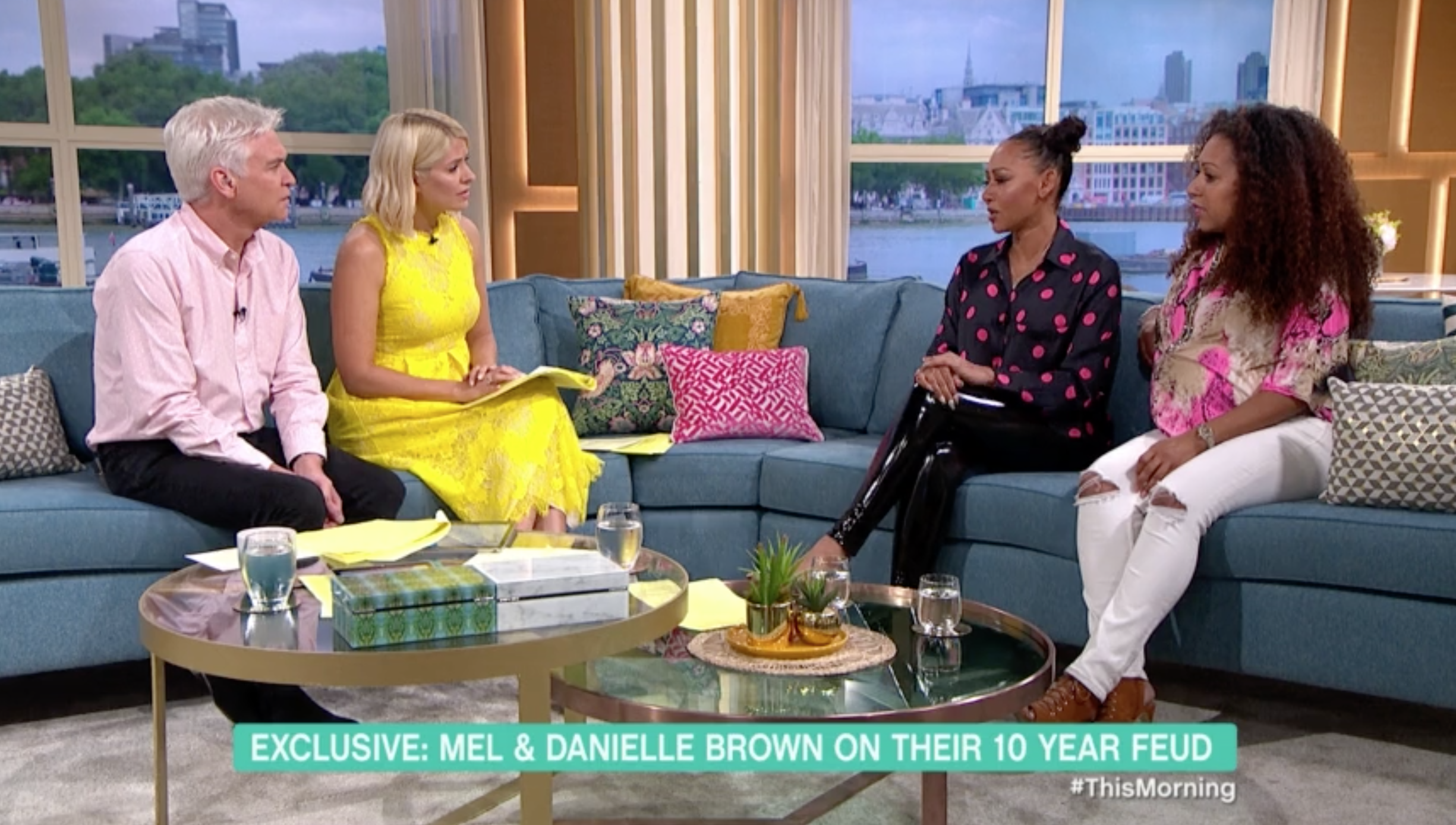 The sisters opened up to Holly and Phil on This Morning (Credit: ITV)

Speaking about rebuilding their relationship, Mel said it has been "quite a healing process", adding that, after she and Stephen divorced, "there was a lot of apologising that I had to do".

Mel continued: "When you're in that kind of relationship it doesn't just affect you - it affects your friends, your family, your kids, everybody."

Danielle found the experience traumatising, too.

Huge Huge Big Up to my sister @officialmelb and all the @spicegirls in rehearsals today,working their butts off 💪🏽🙌🏾 You guys are in for one Jaw dropping amazing show !!!!!!!! I have shaken my belly bump all day and had serious goose bumps all down my arms. Its countdown till the real thing, can’t bloody wait !!!! #spiceofficial #spicegirls #spicereunion #concert #girlpower #bigup #dance #sing #friendship #love #life #family #sisters #showtime #rehearsal #liveband #lovinglife #goosebumps #proud #pregnantdance #lights #stage #countdown

She said: "Lots of people would say why can't you just turn up at her house? People didn't really understand or believe it, oh she looks fine on TV, but her eyes to me always looked dead."

She added: "When we would find out her phone number or address she'd move home or change her number or you'd get a horrible email saying I want nothing to do with you and later on we'd find out it was him replying not Melanie, on her email."

This Morning contacted a rep for Belafonte, who called Mel's claims "fraud".

The Spice Girl has now teamed up with Women's Aid to help other people in abusive relationships.

Happy Birthday to my big sis @officialmelb hope you have a special day,lots of love 💕🎉🌈🎂😘

Admitting that it's "up and down" since their reunion, Danielle admitted it has been a "rollercoaster" and admitted she has felt like "an only child" for the past decade.

However, she added that she had been to see her big sister's recent Spice Girls reunion tour and added: "A lot's been said and done but we're good, it's a healing process and we're probably closer now because of it."

She already has Mimi, 12, and nine-year-old Hendrix from a previous relationship, and her third child is with Ty Maynard.

So yesterday I had a lovely baby shower at home. Everyone kept asking me why am I not doing a baby shower and I just didn’t want the fuss and found it all a bit cheesy and over the top,I didn’t do it with my last 2 and didn’t want to follow the trends BUT.......my friend @sallybamforth sold the idea to me saying just see it as a nice girly afternoon before the baby arrives and organised the whole thing and that’s exactly what it was a lovely sunny afternoon with my girlfriends and family. Anyone who is pregnant I would highly recommend now having a baby shower it’s funny doing the quizzes and also seeing everyone’s baby predictions is funny ,well a bit worrying in my case as everyone has predicted my baby will be over 8 Lb 😬 Big thankyou to everyone who came and made the day so special as it was very last minute too and a big thankyou to all my lovely baby gifts,think it’s time I actually pack my hospital bag as I am fully in baby spirit now and got 9 days till my due date 🙌🏾 👶🏽 🍼 . . . #babyshower

Her eldest daughter Phoenix Chi Gulzar, 20, is from her marriage to dancer Jimmy Gulzar.

She also has one child with her ex-husband Stephen, seven-year-old Madison Brown Belafonte.

What do you think of the sisters' reunion? Head over to our Facebook page @EntertainmentDailyFix and let us know!