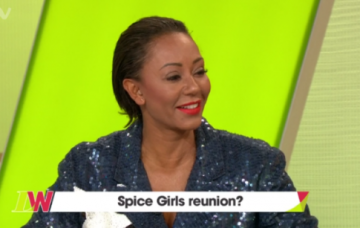 The Spice Girls have been teasing their return since they shared pictures of themselves reunited at Geri Horner’s house in February.

Now Mel B has confirmed they are in the process of working on new projects together – and it will involve all five of them.

“We are in the works of figuring the stuff out – I don’t want to say too much. All five of us have signed with Simon Fuller.

“I can’t say exactly what and when but it’s all very exciting,” she told the Loose Women on Tuesday, as she joined the show for a stint as a guest panellist.

Asked by host Ruth Langsford if the reunion would involve releasing new music, Scary Spice said: “It’s going to be a bit of everything. If it was up to me we’d go on tour immediately. Maybe we will soon – hopefully.

Mel admitted she would love for her younger daughters, Angel, 11, and Madison, six, to see her take to the stage as part of the girl band again, as unlike her eldest, Phoenix, 19, they’ve never seen their mum as Spice Girl.

“They don’t really believe I was in the Spice Girls,” she admitted. “It’s funny because they haven’t seen us together perform. When I told them, ‘Maybe mummy’s going to be going back on tour and getting back with the Spice Girls’, they were like, ‘Yes, finally we get to see what you told us you did for real!’ It was kind of nice.”

Asked why it has taken the girl group so long to reach this point, Mel joked: “I think I’ve just been nagging them all a bit too much. I stopped nagging and then they all said yes.”

She said it was wonderful to reunite with Emma Bunton, Victoria Beckham and Melanie Chisholm at Geri’s house, where they “had a good old natter.”

The mum-of-three said they all get along because: “When you’ve gone through something so huge together – we got famous basically overnight and we only had each other – so we’ve got a bond that nobody can break.”

She added: “It is (like a family). We’re just like five sisters. We bicker a little bit but we’ve always got each other’s back.”

Speaking of her famous outfits from back in the day, she laughed: “Some of them were in the garage. I kind of, this sounds so terrible, I built myself a shrine in my bedroom.

“I got these mannequins and I thought, ‘Oh wouldn’t it be great if I could dress my mannequins in my old Spice Girls stuff?’ I did it as a joke, but actually I really like it.”

The singer also revealed that she’s just signed a publishing deal to write a tell-all memoir.

She said she will talk about her time in the Spice Girls as she “had a beautiful time”, but it will also focus on her relationships.

“I’m kind of just exposing what I’ve been through the last ten years… my marriage and relationship…  the ups and downs,” she said.

She continued: “I’ve got three daughters by three different men, three different solid relationships. I would never want to talk bad about any of their fathers. We made beautiful babies together and all three babies were made with a lot of love. It’s more about my personal journey and what I put up with and what I allowed to happen.”

Mel had her first daughter with Jimmy Gulzar, who she met when he was a backing dancer for the Spice Girls. They were married for two years then split in 2000.

She then had Angel following a fling with actor Eddie Murphy, before marrying Stephen Belafonte in 2007, with whom she had Madison.

They had an acrimonious divorce in 2017.

Would you like to hear new music from the Spice Girls or see them on tour? Leave us a comment on our Facebook page @EntertainmentDailyFix and let us know what you think!