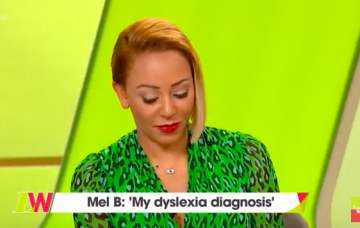 Mel B opens up about dyslexia diagnosis on Loose Women

This is such an important conversation

We all know Mel B is brutally honest – it’s literally the title of her new book – and now the singer has impressed fans once more with her honesty, opening up about her struggle with dyslexia.

The singer, 43, whose real name is Melanie Brown, spoke about her late-in-life diagnosis on Tuesday’s episode of Loose Women.

Speaking to presenters, Andrea McClean, Janet Street Porter and Anne Diamond, the X Factor star revealed: “I was diagnosed with dyslexia last year, and I find it very difficult to read sometimes. Especially when I get emotional.”

The TV star added: “All my life I’ve just thought maybe my brain was wired differently. That’s why I like the entertainment world and writing and singing and dancing, I opt for that kind of creativity.

“I kind of hid it but didn’t know what I was hiding. I’d see words backwards, or I’d have to memorise a script over and over again, or it’d take me five months to read one chapter of a book because I couldn’t compute it.

She added that it felt good to understand why she’d struggled for so long, explaining: “To get diagnosed with that, helped me really, I felt really relieved. All these years and now I know why I’ve struggled so much, especially at school.

“I was just seen as the naughty girl, when actually, I didn’t understand what they were writing on the blackboard and even maths was a nightmare. I felt very dumb, just thick. Everyone else could understand everything apart from me.”

She went on to reveal that she’s learned coping mechanisms, saying: “There’s tools that you can learn. Everybody has a different type of dyslexia. Mine comes in fits and starts.

“Colours on paper and writing helps me learn and understand better and then just talking about it, too, and not feeling so embarrassed and ashamed and taking a minute to go, ‘OK, I’m having difficulty with this word, let me go over it over and over again’.”

In fact, the mum-of-three to Angel, Phoenix and Madison now sees it as a “gift and a blessing”, adding: “Even now it’s kind of emotional to talk about because for so long I didn’t know what was going on with me. So now I do see it as – well this is why I have been the way I am, this is why I have been part of an amazing girl group and been able to cope with the pressure.

“I wish I would have known at school. School for me was traumatising as I didn’t really understand much at all.”

Fans flooded Twitter to thank Mel for opening up a dialogue about such an important issue.

One wrote: “Im dyslexic too and found out when I was 31! I can so relate to @OfficialMelB #LooseWomen as I too was so relieved once I found out! For too long I thought I was just so stupid! #Dyslexia”.

Another commented: “I can see the pain and hurt in @OfficialMelB face if only people could understand. please if someone tells you thay are struggling with #Dyslexia be kind.”

A third tweeted: “Watching @loosewomen and hearing Mel B talk about her journey with dyslexia has got me in tears. The struggle proving to everyone that you aren’t ‘stupid’ or ‘slow’, but trying your hardest to fit in. The frustration is real😩”.

Read more: Mel B opens up about heartbreaking split from family

Mel has been a regular on the ITV lunchtime show lately, and on Monday she opened up about how the death of her father allowed her family to put aside a rift that had kept them apart for more than eight years.

The former Spice Girls, whose divorce from Stephen Belfonte was finalised in December, reunited with her mother and sister last year while her father was in hospital battling cancer.

She told the Loose Women panel: “It was about eight years that I didn’t speak to them. It was heartbreaking.

“I was actually married and I was in an isolated, stressful kind of relationship, which prevented me from even reaching out to my family.”

Thanks for your honesty, Mel, sending our love.

Do you think this is an important conversation to be having? Leave us a comment on our Facebook page @EntertainmentDailyFix and let us know what you think.