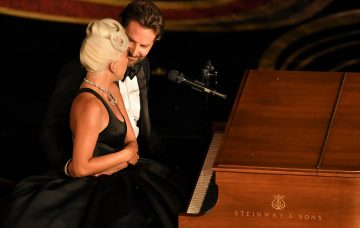 She accused her of getting too intimate with co-star

The A Star Is Born co-stars sang Shallow, the love song from their hit movie, in which they play Ally and Jackson.

Lady Gaga played the piano as she and Bradley sang to each other, before he came to sit with her and they put their heads together for the finale.

Piers Morgan was doing coverage of the event for Good Morning Britain, with Mel B as a guest.

“When we watched the end, when they come together…” he said.

She put her head in her hands as she replied: “See, I felt so uncomfortable for Bradley’s girlfriend, oh my gosh,” she shouted.

Bradley’s partner, supermodel Irina Shayk was on the front row, watching the performance.

Some celeb viewers loved their act, with actress Alyssa Milano among the many praising it.

She tweeted: “That was [bleep] beautiful, @ladygaga and Bradley Cooper. #AStarIsBorn.”

Singer Ally Brooke tweeted: “Oh my god that was pure magic….I have goosebumps all over my body….one of the most beautiful things I’ve seen….speechless….

“I love you so much Bradley and Gaga. rewinding and watching again bc that was phenomenal.”

American YouTube personality Philip DeFranco said: “Based on the Internet reaction I think legally speaking Lady Gaga and Bradley Cooper have to get married and have a baby now or it’s a felony. #Oscars.”

One viewer wrote: “not to be dramatic but the way bradley cooper and lady gaga look at each other sets my insides ON FIRE.”

Another commented on the chemistry between the pair, tweeting: “Raise your hand if you thought Lady Gaga and Bradley Cooper were about to make out. #Oscars⁠ ⁠.”

“Who doesn’t want someone to look at them the way Lady Gaga and Bradley Cooper look at each other?” one fan tweeted.

“Damn! That performance brought me to tears and solidified my crush on both of them! #AStarIsBorn.”

However, for a large number of Oscars viewers, the performance was not to their liking.

One tweeted: “Lady Gaga and Bradley Cooper together make me so uncomfortable…. too many long awkward stares into each other’s eyes.”

Another echoed the sentiment, writing: “Is it just me or did that performance from lady gaga and bradley cooper made you feel a lil’ awkward?”

One viewer said their “chemistry is off the charts” but that it must be “awkward” for his partner, supermodel Irina Shayk, to watch in the audience.

Lady Gaga and Bradley received a standing ovation at the Dolby Theatre in Los Angeles following their rendition of Shallow.

What did you think of their behaviour? Leave us a comment on our Facebook page @EntertainmentDailyFix and let us know what you think.