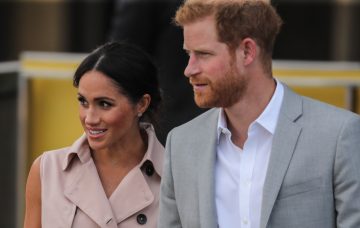 Meghan wore a pink trench dress from a Canadian brand

The Duke and Duchess of Sussex shared a laugh as they arrived for their latest engagement.

The couple, who married in May, attended the opening of the Nelson Mandela Centenary Exhibition at the Queen Elizabeth Hall, Southbank Centre in London on Tuesday morning.

Meghan, 36, was seen giggling at something Harry, 33, said as they made their way indoors.

The Duchess of Sussex wore a pale pink sleeveless trench dress, which is from Canadian brand House of Nonie and retails for £624.

Her favoured ‘messy bun’ style hairdo was back.

The Duke of Sussex, meanwhile, wore grey trousers and a light grey jacket with a white open-necked shirt and no tie.

The Nelson Mandela Centenary Exhibition runs from July 17 until August 19 and marks 100 years since his birth in 1918.

It delves into Mandela’s life, career and legacy.

Over the weekend, the Duchess of Sussex made her debut in the Wimbledon royal box as she joined sister-in-law Kate, the Duchess of Cambridge, to watch the ladies’ singles final.

It marked Meghan and Kate’s first engagement together without their husbands.

For Meghan, it was particularly special as her close friend Serena Williams was playing in the final against Angelique Kerber.

Serena was among the guests at The Duke and Duchess of Sussex’s wedding in May.

Meanwhile, Meghan and Harry were back to work on Tuesday after a busy week.

Last week they attended the christening of Prince Louis of Cambridge before a morning spent celebrating the 100th anniversary of the RAF in London that included a balcony appearance for a fly-past.

They jetted to Dublin later that night for their first overseas visit as a married couple.

Their two-day Dublin agenda included meetings with the Taoiseach and Irish President, visiting Croke Park, the Book of Kells, the Famine Memorial and the start-up hub, DogPatch.

Later in the year they will travel further afield, taking on an overseas tour of New Zealand, Australia, Fiji and Tonga.

Do you enjoy seeing new pictures of the Duke and Duchess of Sussex? Leave us a comment on our Facebook page @EntertainmentDailyFix and let us know what you think!