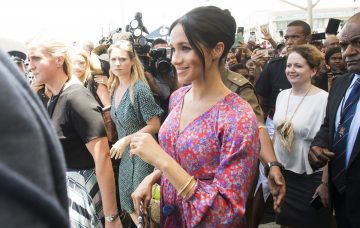 Pregnant Duchess of Sussex rushed out of Fiji engagement by security

The Duchess of Sussex has been rushed out of a busy market in Fiji amid fears over “crowd management issues”.

The 37-year-old royal – who recently announced she’s expecting her first child with the Duke of Sussex – made a visit to the venue on Wednesday in order to learn more about a UN Women project called Markets for Change.

According to the Telegraph, she’d been scheduled to spend around 15 minutes at the marketplace, which was a solo engagement without her husband Prince Harry, 34.

A palace aide told the newspaper: “It was hot, humid and uncomfortably busy and there were far larger crowds than expected. She met everyone she was meant to meet and left.”

Meanwhile, an insider told Evening Standard that there was no specific security threat to Meghan, but her security team had been concerned there were no barriers between her and the large crowds, although they “appeared calm and orderly”.

Meghan and Harry arrived in Fiji on Tuesday after flying in from Sydney.

Harry kicked off Wednesday’s engagements solo, laying a wreath at the Fiji War Memorial before meeting up with Meghan to visit the University of the South Pacific campus in Suva.

Meghan wore a printed ruffle dress by Figue that retails for $1,425 but is currently sold out.

In her first speech on the royals’ ongoing tour, the Duchess stressed the value of education and also spoke of her own struggle to afford to attend university.

The former Suits actress – who attended Northwestern University in the US – said the “journey of higher education is an incredible, impactful and pivotal one”.

She continued: “I am also fully aware of the challenges of being able to afford this level of schooling for many people around the world – myself included.

“It was through scholarships, financial aid programmes and work-study – where my earnings from a job on campus went directly towards my tuition – that I was able to attend university. And, without question, it was worth every effort.

After the university visit – which was streamed to other campuses in the Pacific – the royal couple split, with Meghan visiting the market and having tea at the British High Commissioner’s House while Harry visited the Colo-i-Suva forest, which is part of the Queen’s Commonwealth Canopy.

They will carry out further engagements in Fiji on Thursday before travelling to Tonga, back to Australia and on to New Zealand to draw their 16-day tour to a close.

Have you been enjoying updates on Meghan and Harry’s overseas tour? Leave us a comment on our Facebook page @EntertainmentDailyFix and let us know what you think!