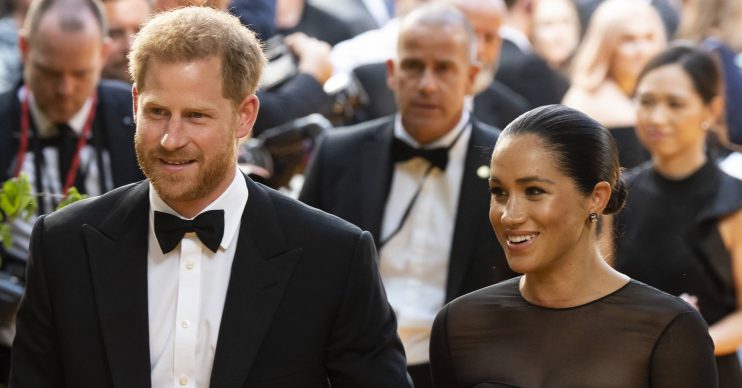 The Duchess of Sussex wowed in a black gown as she attended the Lion King premiere last night.

Meghan, 37, wore a stunning £3,454 black dress by Jason Wu as she walked the yellow carpet in Leicester Square with husband Prince Harry.

The dress featured a partly sheer bodice with sheer sleeves and fell just below her knee.

She completed her look with a £1,680 black Gucci bag and a pair of black pumps by Aquazzura, costing £640.

As a former actress, Meghan has walked a string of red carpets however, this was her first as a royal.

The new mum and hubby Harry watched the remake of the ’90s film and met the cast and crew of the movie.

The couple met Beyoncé, who stars in the film, and her husband Jay Z.

Meghan and Beyoncé shared a sweet moment at the premiere as the singer gushed over the royal couple’s baby son Archie.

Rapper Jay Z apparently gave the new parents some advice of “always finding time for yourself”.

During the royal engagement, Meghan was given a bouquet, a book and a Simba toy for Archie by two little girls in the crowd.

For the movie’s release, Disney announced the Protect The Pride campaign, aimed at raising awareness of dwindling lion numbers.

The Royal Foundation will be involved with and will support the campaign.

Buckingham Palace said: “The Duke of Sussex has taken a deep personal interest in frontline conservation projects that work to protect Africa’s natural heritage and support both wildlife and local communities.”

Meghan is currently on maternity leave following the birth of her son Archie in May.

This is the new mum’s second royal outing this week after she attended Wimbledon with her sister-in-law Kate, the Duchess of Cambridge, at the weekend.

The pair were also joined by Kate’s sister, Pippa Middleton.

Kate, wearing a bespoke green midi dress, and Meghan – in a white pleated skirt and blouse – arrived to the venue in south-west London separately, with Kate thought to have lunched with former champions beforehand.

The trio watched the title-deciding match between Serena Williams and Simona Halep on Centre Court.

What did you think of Meghan’s dress? Leave us a comment on our Facebook page @EntertainmentDailyFix and let us know.