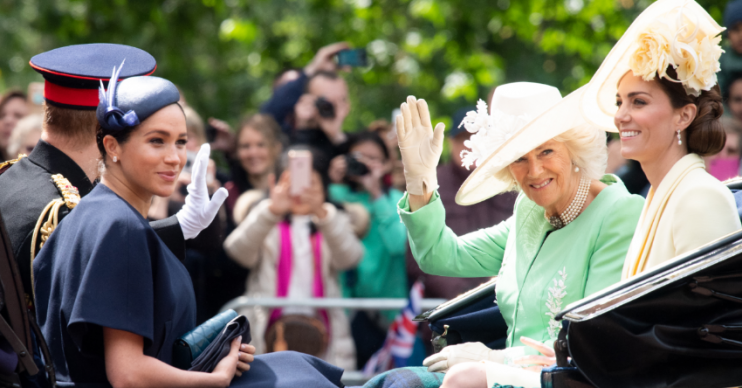 Back to work for the Duchess of Sussex!

Just four weeks after welcoming son Archie Harrison, the Duchess of Sussex has returned to her royal duties.

Meghan was seen arriving at Buckingham Palace this morning alongside her husband Prince Harry and along with the Duchesses of Cambridge and Cornwall.

They were attending the Trooping The Colour ceremony, which celebrates the Queen’s official birthday.

It is the first time Meghan has been seen in public since she presented her son to the world.

The proud parents are not thought to have brought along their newborn son to the annual event.

The royal smiled as she arrived at the palace in the back of a dark blue Range Rover.

She was wearing a navy outfit and wearing her hair swept back in to an elegant bun.

Last year, fresh from her wedding, Meghan was also seen taking part in the royal procession alongside husband Harry. She looked gorgeous in a peach dress and matching hat.

New mum Meghan had apparently told her aides that she was keen to return to work as soon as possible following Archie’s birth.

A source told The Sun: “Meghan has made it very clear she wants to return to work as soon as possible. She has huge amounts of energy, is extremely determined and wants to be as hands-on as possible with her charities.”

She follows her sister-in-law the Duchess of Cambridge, who returned to her duties just five weeks after delivering her first child, heir to the throne Prince George.

Kate also arrived at the palace this morning, looking resplendent in sunshine yellow.

She was joined by her husband Prince William before being seen chatting and laughing with Meghan, Harry and the Duchess of Cornwall as they made their way up the Mall in an open-top carriage.

It’s hoped that Will and Kate’s three children – George, Princess Charlotte and Prince Louis – will be seen on the Buckingham Palace balcony, alongside the rest of the royal family, later today.

Prince Philip will be one notable absentee though, after he retired from official duties. He celebrates his 98th birthday on Monday.

Head over to our Facebook page @EntertainmentDailyFix and let us know what you think of Meghan’s return to work.