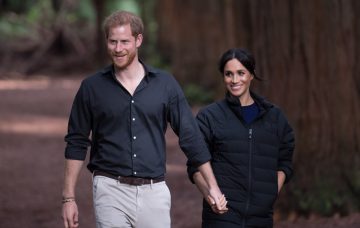 The Duchess of Sussex’s nephew has hit out at the “embarrassment” of having relatives “spew hate” about his aunt.

Tyler Dooley has always “admired” the former actress – who was known as Meghan Markle before her marriage to Prince Harry – and doesn’t think comments from the likes of her half-sister Samantha Markle, who has been one of the Suits star’s most vocal critics, should be made public.

He told The Times newspaper: “I’ve always admired her, from when I was a small child, and I’ve always looked up to her. She has always been so pleasant and full of life.

“You know what goes on in the media with members of my family and it’s just terrible. It’s an embarrassment to have family members out there speaking negatively about Meghan and it’s just something that shouldn’t be reported.

“They continue to give them a platform to kind of spew hate, you know. I’m really done seeing that. It’s just negative.

“She has never done anything wrong to anybody and she’s successful, she’s smart, she’s beautiful. There’s nothing not to like.”

But Tyler is close to his grandfather, Meghan’s father Thomas Markle Sr. – who posed for paparazzi photos weeks before the wedding and ultimately failed to attend due to ill health.

Tyler is about to star in a new MTV series called The Royal World, a reality series that sees people with links to the upper echelons of society living together in an English country mansion.

In a trailer for the show, he says: “I’m connected to royalty because my auntie Meghan happens to be married to Prince Harry. I think I represent more of the average person who could be watching this show.”

He added: “I didn’t watch the Royal Wedding, I’m sorry, Meghan, I didn’t! I went over there and was in London to support my aunt Meghan. Honestly, with the controversy that’s happened with my family, all I wanted to do was just show my support.

“My favourite member of the British Royal Family would be my lovely aunt Meghan ’cause honestly I don’t know anybody else in the Royal Family.”

Meghan is currently over in New Zealand with husband Harry as they conclude their 16-day tour of Australia, Fiji, Tonga and New Zealand.

The couple thrilled fans by announcing on their first day of the tour that Meghan is pregnant with their first child.

Since then, Meghan’s estranged half-sister Samantha has spoken out in a bid to reconcile with the former actress, and urge her to include dad Thomas in the baby’s life.

Samantha, who has not spoken with Meghan in three years, told Daily Mail TV: “I think everybody really just needs to come together and realise this is really important and special for Meg, for Harry, for the child, for all of us, and we need to stop the sparring.

“I would hope that — for the sake of the baby, the family, the world and my dad — that leaving him out of the statement was not intentional.

Will you watch Tyler in new MTV show, The Royal World? Leave us a comment on our Facebook page @EntertainmentDailyFix and let us know what you think!