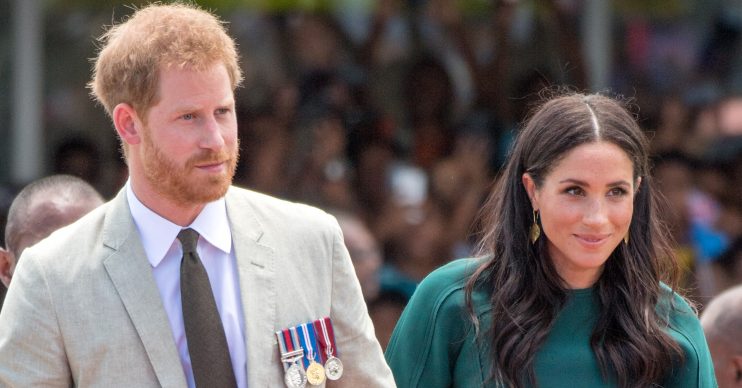 The royal tot was born just three months ago

The Duke and Duchess of Sussex have reportedly hired a third nanny for son Archie.

The royal tot was born in May this year and Meghan and Harry have apparently already had two nannies for him.

It’s been said their new nanny joined them on their two recent holidays this month and Meghan reportedly described her as a “godsend”.

The nanny was seen boarding one of the private jets taking the couple to Nice, France, where they stayed in Sir Elton John’s £15 million mansion.

A source told The Sun: “Meghan is a very hands-on mum but the new nanny is a godsend. She is extremely professional, with a number of nannying years under her belt, and has fitted into the family really well.

“She’s great with little Archie and just adores him. Harry and Meghan are very happy with her.”

It’s been reported that the nanny will join Meghan and Harry on their royal tour to South Africa next month.

The woman is the latest staff member to join Meghan and Harry’s team.

The turnover of staff working for Meghan has raised eyebrows in some quarters – with a bodyguard, personal assistant and private secretary among those to leave their jobs since her wedding to Harry in May 2018.

The couple have been making headlines recently for taking four private jet journeys despite encouraging others to look after the environment.

However, on Monday, singer Elton spoke out on Instagram to defend Meghan and Harry.

He wrote: “I am deeply distressed by today’s distorted and malicious account in the press surrounding the Duke and Duchess of Sussex’s private stay at my home in Nice last week.

“After a hectic year continuing their hard work and dedication to charity, David and I wanted the young family to have a private holiday inside the safety and tranquillity of our home.

“To maintain a high level of much-needed protection, we provided them with a private jet flight.”

He added: “To support Prince Harry’s commitment to the environment, we ensured their flight was carbon neutral, by making the appropriate contribution to Carbon Footprint.

“I highly respect and applaud both Harry and Meghan’s commitment to charity and I’m calling on the press to cease these relentless and untrue assassinations on their character that are spuriously crafted on an almost daily basis.”