US daytime TV presenter Ellen DeGeneres appears to have confirmed that she WILL be interviewing Meghan Markle.

The host of the Ellen Show, 61, is rumoured to be set to do a sit-down interview with the Duchess of Sussex, 38.

It would be Meghan's first interview since stepping down from royal life with husband Prince Harry and moving to Canada with their son, eight-month-old Archie.

Asked by a reporter if she was excited about the prospect of a chat with Meghan, Ellen replied positively.

The interview with Ellen would be Meghan's first since leaving the royal family (Credit: SplashNews.com)

The veteran host and actress said: "Sure, I'm excited."

Her comments come just a day after the Mail Online claimed that insiders had told them Ellen and Meghan are in talks for a tell-all interview.

An Ellen Show insider is reported to have said: "Ellen and Meghan have already discussed a sit-down interview. That has been in the works for quite some time now."

Ellen previously spoke out in Meghan's defence, after visiting her, Harry and Archie in a whirlwind visit to the UK. 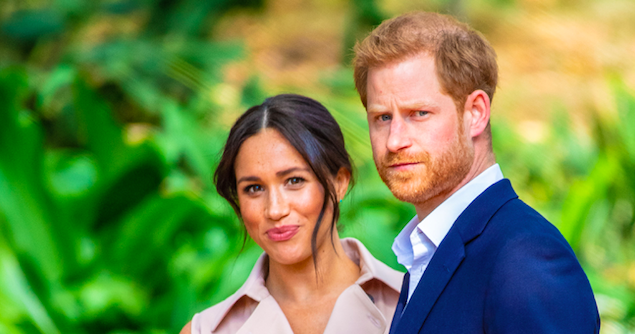 She told her chat show audience shortly after: "I see them get attacked and it's not fair. They are two of the most down-to-earth compassionate people, they're doing so much good for the world."

A source also told the Mail Online that Meghan sees a "kindred spirit" in Ellen: "[Meghan] said Ellen understands her pain and suffering. That she epitomises authenticity. [Meghan] feels like they are kindred spirits."

The pair are believed to have met for the first time by chance years back at an adoptions event in an animal shelter in Los Angeles.

Ellen is reported to have encouraged Meghan to adopt her pet beagle Bogart, who now resides with her in Canada.

An interview with Ellen would no doubt come across as a snub to Oprah Winfrey, who was initially rumoured to be tasked with interviewing Meghan since her shock decision to walk away from her royal duties with Harry.

Oprah attended their 2018 wedding and has also defended their decision to leave the royals.

She said in an interview this week that she supported their actions "100%" and added: "To give up everything you’ve known in your whole life to say I’m going to choose this new life for what I believe to be the truest vision for myself. Who are any of us to stand in judgment of that?"

ED! has reached out to Ellen DeGeneres' and Meghan Markle's representatives for comment.

Would you watch Meghan be interviewed by Ellen? Share your thoughts with us on our Facebook page @EntertainmentDailyFix.