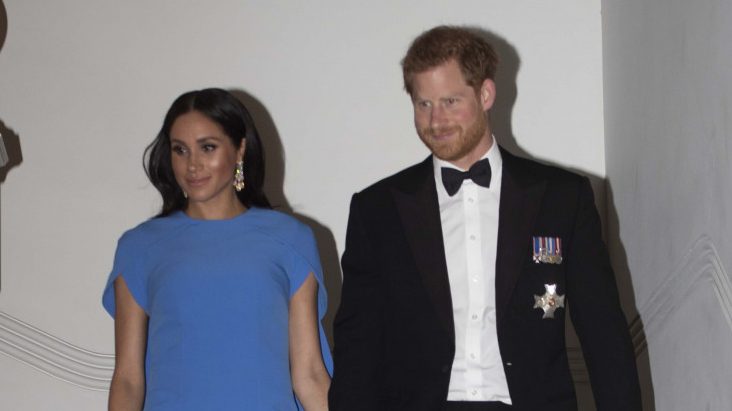 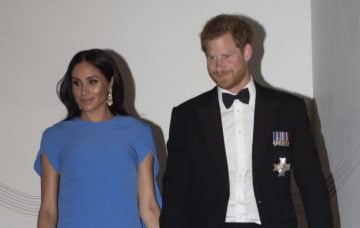 The royals flew into the Fijian capital on Tuesday morning

The Duchess of Sussex revealed the clearest look yet at her blossoming baby bump as she donned a beautiful blue dress in Fiji.

Meghan, 37, slipped into a stunning, floor-sweeping dress by the designer SAFiYAA as she attended a black tie reception with husband Prince Harry, 34, on Tuesday night.

The couple had arrived in Fiji’s capital of Suva earlier that day.

Meghan was pictured in the cape dress and wearing dazzling diamonds as she joined Harry at the Grand Pacific Hotel to attend the state dinner hosted by the Fijian President.

She clasped her hands across her stomach, highlighting her small bump.

Harry is due to speak at the event.

Meghan has resumed normal duties on the couple’s overseas tour after cutting back slightly on engagements in the last two days in order to rest.

The former Suits actress, who is expecting her first child in the spring, had skipped a morning of engagements in Sydney on Sunday and sat out the day’s events on Fraser Island on Monday, before joining her husband for a walkabout at the end of the day.

A royal aide told The Telegraph of Meghan yesterday: “She isn’t sick, she just had a tiring few days and we were concerned about the roads on the island which are incredibly bumpy and uncomfortable for anyone, let alone a pregnant woman.

Meghan and Harry flew into the Fijian capital on Tuesday morning where they were metwith a Guard of Honour before continuing on to Borron House to meet the President of Fiji.

They attended an official welcoming ceremony at Albert Park, which reflected one attended by The Queen and The Duke of Edinburgh on their visit to Fiji in 1953.

The Duke and Duchess of Sussex have a busy programme in Fiji which will include visiting the Fiji War Memorial to pay their respects, meeting war veterans, touring the University of the South Pacific campus in Suva and meeting students.

Both Meghan and Harry will speak at their university engagement, which will be live-streamed to other unis in the Pacific region.

Meghan will also take on solo engagements in Fiji, attending a morning tea at the British High Commissioner’s Residence which will highlight the achievements of women in the country, before travelling to Suva Market to meet the female vendors.

They will remain in Fiji carrying out engagements until Thursday, when they’ll fly Tonga for more engagements, before returning to Sydney to close Harry’s Invictus Games.

They will close their overseas tour by visiting New Zealand before returning to London.

Meghan and Harry will have carried out about 76 engagements across their 16-day tour by the time it ends.

They announced their happy baby news last Monday, just as they arrived in Australia, with a statement from Kensington Palace saying: “Their Royal Highnesses The Duke and Duchess of Sussex are very pleased to announce that The Duchess of Sussex is expecting a baby in the Spring of 2019.