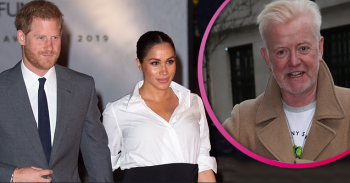 Chris Evans’ theory on the arrival of Baby Sussex

The DJ thought he had proof the tot had arrived

Chris Evans claimed earlier this week that Prince Harry and Meghan have already welcomed their baby.

The Virgin Radio breakfast show presenter teased: “I think I know something” as he suggested that “there might be a new royal baby already”.

He then went on to claim that the Queen had visited the couple, following reports that she joined them at home in Frogmore Cottage at Windsor Castle over Easter weekend.

We’ve all been waiting on tenterhooks for the new arrival, with no news yet, but Chris seemed to suggest that apparently that doesn’t mean anything!

Chris told his listeners on his Wednesday, May 1 show: “We sit here still finding ourselves… some say minus a new royal baby, or do we… ladies and gentleman?”

His news presenter Rachel Horne asked him: “What do you know?’ He replied: “I’m not sure what I know, but I think I know something.”

She asked him: “What do you think you know?”

He then said: “I’ll tell you after today’s absolute classic…”

She then begged: “A little hint?”

The 53-year-old then said: “Well, there’s more than a hint, what more of a hint do you want, other than the fact that I think there might be a new royal baby already?

Rachel then quizzed: “Did she drive past your house?”

Rachel then demanded: “When, when was it last night, was it this morning, middle of the night? I need details?”

Chris asked: “Why?” to which Rachel responded: “Because I need to know these things.”

He then concluded: “The Queen has been to see them. Now, that doesn’t happen.”

However, it looks as though Chris’ theory was somewhat wide of the mark as, on Thursday, May 2, the Palace confirmed Baby Sussex was not yet born.

And on Friday, May 3, it was announced that Prince Harry’s scheduled work trip abroad next week had been postponed.

He was due to visit the Netherlands on May 8 and 9, but this has now been put back. This suggests they aren’t sure when to expect the new royal to make it way into the world yet either!