Prince Harry and Duchess Meghan's ITV documentary has divided viewers, but all have agreed on one thing: how adorable Archie is.

The Duke and Duchess of Sussex opened up about their little boy’s cute traits when they introduced their five-month-old son to Archbishop Desmond Tutu and his daughter, Thandeka Tutu-Gxashe, during their trip to Cape Town last month.

A sweet clip shared during ITV's documentary Harry & Meghan: An African Journey, which aired on Sunday (20.10.19), showed Archie giggling with Thandeka as his father wiped his dribble away.

Harry said: "I think he knows exactly what's going on." 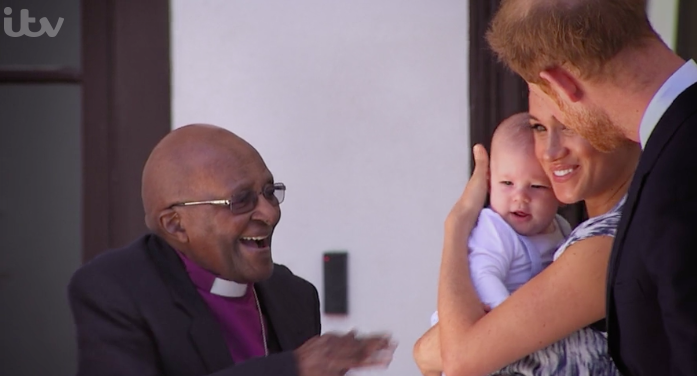 Meghan then opened up about how parenting is "a lot” but admitted she and Harry are lucky the tot was "sleeping very well".

He’s the happiest here. So chatty over the last few days.

"It's not lost on us what a huge and significant moment this is.

Read More: Meghan and Harry 'plan to take six weeks off before Christmas'

Harry revealed his son had been alert and taking in the surroundings on their royal tour, and the 37-year-old former actress - who tied the knot with the prince at St. George’s Chapel in Windsor last May - added:

"He’s the happiest here. So chatty over the last few days."

I watched the Harry and Meghan documentary on @ITV and it was very emotional and Meghan is coping very well with everything that’s happening at the moment. Also baby Archie is very cute. Harry and Meghan have my support 100%. #HarryandMeghan #RoyalCouple #Sussexes 👑

Elsewhere, Meghan let slip her sweet nickname for her husband.

Opening up about joining the royal family and how she has adopted the "British stiff upper lip", she said: "You know, I’ve said for a long time to H, that’s what I call him, it’s not enough to just survive something.

Read More: All the best looks from the Duchess of Cambridge's royal tour wardrobe

“That’s not the point of life, you have to thrive, you’ve got to be happy.

“I think I’ve really tried to adopt this British sensibility of a stiff upper lip.”