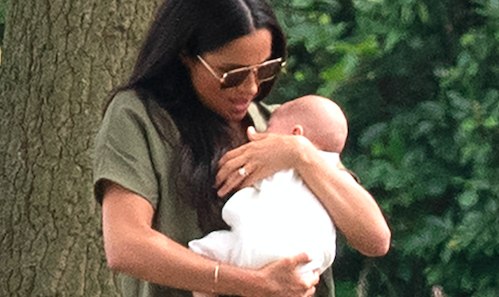 Critics say she looked uncomfortable with her own child...

Meghan Markle has been accused of not holding her baby son correctly by concerned fans.

The Duchess of Sussex appeared at a polo tournament on Wednesday (July 10), to support her husband Harry who was taking part.

Some fans were thrilled to catch a sighting of the eight-week-old royal baby, but others found fault with the way the new mum was carrying Archie.

Posting on the ED! official Facebook page, one fan commented: “Meghan needs to learn how to hold a baby properly!”

Another agreed, saying: “She needs lessons how to hold her baby.”

Others said she looked “very uncomfortable”, “awkward” and “unnatural”.

“You’d think after eight weeks she’d know how to hold him properly,” commented another, adding: “He should be wearing a hat in that sunshine, too.”

Another compared how “totally comfortable” Kate looked when she carried first child George outside the hospital hours after birth.

However, some fans were quick to defend the Duchess, 37, begging critics NOT to mum-shame her.

One defender said: “Can you think of anything else to pick on her for? Did not see anything wrong with how she is holding her baby. Maybe that is the way he was most comfortable. When you hold them and they stop fussing, you know they are comfortable.”

Another said: “It’s her child and he is obviously comfortable and he may prefer to be held that way.”

A third added: “Every mother holds her baby the way she wants. Why don’t you keep your comments to yourself?”

Today The Duke of Cambridge and The Duke of Sussex are taking part in the King Power Royal Charity Polo Day for the Khun Vichai Srivaddhanaprabha Memorial Polo Trophy.

The charity match is helping raise funds and awareness for charities supported by Their Royal Highnesses. pic.twitter.com/9ziCa0pN9G

Both Duchesses attended the event to support their husbands, who were going head to head at the King Power Royal Charity Polo Day for the Khun Vichai Srivaddhanaprabha Memorial Polo Trophy at Billingbear Polo Club.

William and Harry were playing against each other in the game, honouring the late Leicester City owner Khun Vichai Srivaddhanaprabha – who died in a helicopter crash in October.

The polo match was the first time the Sussexes and the Cambridges have been seen together as families since Archie’s birth, excluding Archie’s private Christening at the weekend.

Archie, who was on his first public outing after his private Christening on Saturday, was spotted in the arms of his mum who wore a flowing khaki dress with designer shades.

The former Suits actress is currently on maternity leave following Archie’s birth in May, but she has already made a handful of appearances, most recently to watch close friend Serena Williams at Wimbledon last week.

Do you think critics mean the best for Meghan? Or should they leave her alone? Leave us a comment on our Facebook page @EntertainmentDailyFix and let us know what you think!