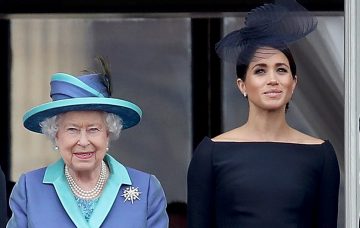 The royal family has marked the 100th anniversary of the RAF

Megan, the Duchess of Sussex has enjoyed her second ever appearance on the Buckingham Palace balcony.

The 36-year-old stood to The Queen’s left hand side and slightly behind her, as senior members of the royal family watched an historic fly-past on Tuesday afternoon to celebrate 100 years of the RAF.

Meghan is believed to get on well with The Queen after accompanying Her Majesty on a series of engagements in Cheshire in June, where they were pictured laughing and smiling together.

This is only Meghan’s second balcony appearance, after first stepping out for Trooping The Colour in June.

Meghan’s husband Harry, The Duke of Sussex, was on her left.

Harry’s brother, William, The Duke of Cambridge, and his wife, Kate, The Duchess of Cambridge, were stood slightly in front of Harry and Meghan, along with The Prince of Wales, Duchess of Cornwall, Princess Royal and other family members.

It was another huge moment for Meghan, who has been adapting to life as a member of the royal family since she married Harry at Windsor Castle on May 19.

Meghan wore a deep navy boat neck dress from Dior, that was a similar shape to her iconic wedding dress.

On the forecourt at Buckingham Palace The Queen is joined by The Prince of Wales and other members of The Royal Family for a "Presentation of the Colours" to the @RoyalAirForce #RAF100 pic.twitter.com/jAaC8AsJR8

She started her morning attending a service for the RAF at Westminster Abbey alongside her husband, The Queen and other senior royals, before the royals returned to Buckingham Palace.

They assembled on the palace forecourt to watch as The Queen made a speech and presented a new Queen’s Colour to the RAF before heading back inside and out onto the balcony.

There was a huge parade along The Mall and a fly-past featuring around 100 planes.

It’s a busy week for Meghan and Harry, 33, as they’ll fly to Ireland later on Tuesday ahead of a two-day royal visit, their first overseas engagement as a married couple.

They have a jam-packed itinerary in Dublin including meetings with the Taoiseach, Leo Varadkar, and Irish President, Michael D. Higgins, and visits to the likes of Croke Park.

They’ll also view the Book of Kells and visit the famine memorial, alongside other meetings, engagements and a summer party at the British Ambassador’s residence.

On Monday, they joined the Cambridges for the christening of Prince Louis at The Chapel Royal, St. James’ Palace, which was followed by a tea party at Clarence House.

Do you enjoy seeing photos of the royal family? Leave us a comment on our Facebook page @EntertainmentDailyFix and let us know what you think!