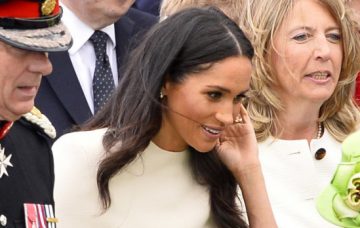 Meghan, Duchess of Sussex joins The Queen for engagement in Cheshire

Meghan, the Duchess of Sussex has accompanied The Queen on a royal engagement for the first time.

The former actress joined Her Majesty in Cheshire on Thursday for a packed day that will include opening the Mersey Gateway Bridge and Storyhouse Theatre.

They arrived at Runcorn Station on the overnight Royal Train to begin their busy day, which will conclude with a lunch at Chester Town Hall held by Chester City Council.

Their day will include meeting architects, planners and community representatives at Mersey Gateway Bridge and watching a performance by local schoolchildren called’Bringing Communities Together: Halton’s River Crossings Over The Ages’.

The Queen will unveil a plaque at the bridge before the royals carry on to their second engagement of the day at the theatre.

They will be given a tour of the theatre and meet various groups of schoolchildren and performers, who will give them performances of their latest works and projects.

The Queen will also unveil a plaque at the theatre.