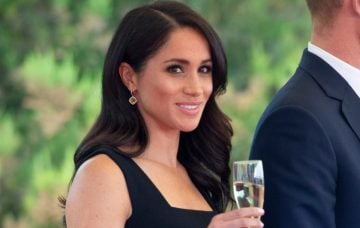 Meghan, The Duchess of Sussex looked enthralled as she was greeted by two beautiful dogs during an engagement in Dublin.

Meghan and her husband Prince Harry arrived in Dublin on Tuesday night for a two-day royal visit, their first overseas visit as a married couple.

On the itinerary on Wednesday morning was a meeting with President Higgins and his wife at their home, Áras an Uachtaráin.

Both Meghan and Harry, 33, were seen smiling at the couple’s dogs and bending down to stroke them outside the impressive property.

It’s a busy agenda for The Duke and Duchess of Sussex in Ireland.

They were greeted by Ireland’s Taoiseach Leo Varadkar on their arrival and went on to attend a garden party at the British Ambassador’s official residence.

Other engagements pencilled in for Wednesday include visiting Dublin’s famine memorial and the Book of Kells, and touring Croke Park, which is the headquarters of the Gaelic Athletic Association.

They’ll also visit the CHQ museum and EPIC Irish emigrant museum, and DogPatch Labs, a working space for tech start-ups, before heading back to London on Tuesday night.

The Duke and Duchess of Sussex’s visit to Ireland was at the request of the government, and came just a few months after they visited Northern Ireland as an engaged couple.