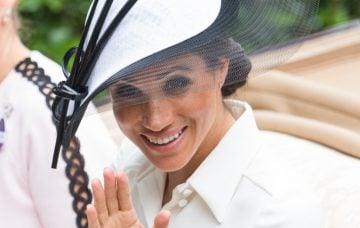 She joined husband Prince Harry for the prestigious event

Meghan, the Duchess of Sussex has made her first appearance at Royal Ascot.

The former actress joined The Queen and other members of the royal family at the prestigious event on Tuesday afternoon.

Meghan, 36, arrived alongside husband Prince Harry, 33, in a carriage which they shared with Harry’s uncle, The Earl of Wessex, and his wife Sophie, the Countess of Wessex.

A warm welcome to the newly-married Duke and Duchess of Sussex at #RoyalAscot… pic.twitter.com/LloJ3Vvsq2

The American once again chose an outfit by Givenchy, the design house behind her wedding dress and the cream ensemble she wore during a series of engagements with The Queen in Chester last week.

Meghan and Harry will present the winning trophy for the 4.20pm race.

Elsewhere, The Queen wore a bright citrus lemon outfit to travel in a carriage with her daughter, Anne, the Princess Royal.

It was announced minutes before the royal carriage procession that Anne’s daughter, Zara Tindall, gave birth to a second daughter with husband Mike on Monday.

Meanwhile, it was announced earlier today that the Duke and Duchess of Sussex will visit Dublin on a two-day engagement in July.

Kensington Palace said the couple will travel to Ireland on July 10 and 11 at the request of Her Majesty’s Government.