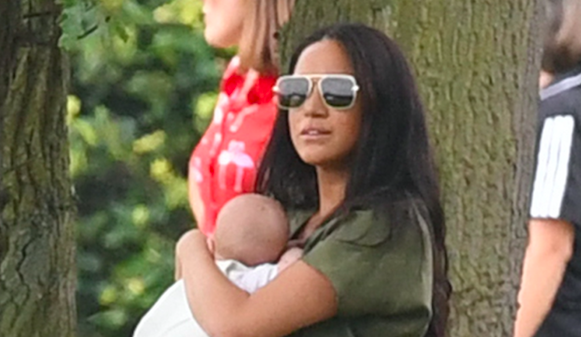 Harry and William went head to head in the sporting tournament

New mum Meghan Markle looked enamoured with her eight-week-old son Archie today, when she arrived at a charity polo match to support her husband Harry.

The Duchess of Sussex was seen planting a kiss on her baby boy’s head as she attended the sporting event on Wednesday (July 10).

However, it remains to be seen if relations with her sister-in-law Kate Middleton will be as warm…

Kate, the Duchess of Cambridge, was also at the event and was pictured playing with Princess Charlotte and Prince George as she carried one-year-old Prince Louis.

Both Duchesses were there to support their husbands, who were going head to head at the King Power Royal Charity Polo Day for the Khun Vichai Srivaddhanaprabha Memorial Polo Trophy at Billingbear Polo Club.

William and Harry were playing against each other in the game honouring the late Leicester City owner Khun Vichai Srivaddhanaprabha – who died in a helicopter crash in October.

Reports say Meghan, 37, and Kate are not on friendly terms – but will they put their reported differences behind them at the polo match?

Archie, who was on his first public outing after his private Christening on Saturday, was spotted in the arms of his mum who wore a flowing khaki dress with designer shades.

At the time of writing, the pair had not yet been pictured talking to each other, although they were seen within yards of each other.

The family event comes after months of rumours about frosty family relations.

Kate and Meghan reportedly fell out in the build up to last year’s royal wedding in an apparent disagreement over Princess Charlotte’s bridesmaid dress.

Meghan and Harry moved away from Kensington Palace estate where they were living close to Kate and Wills, and have settled in Windsor.

The Sussexes are also said to have split from their joint charity with the Cambridges, The Royal Foundation, fuelling more speculation about a feud.

A royal author has claimed that the palace are trying to avoid diary clashes with the two couples to avoid awkwardness.

The Duchess of Sussex has this week made headlines after it was claimed her security team tried to stop tennis fans from taking photos of her at Wimbledon.

She was met with a barrage of criticism, including from GMB host Piers Morgan.

They have also been criticised over their secretive christening last weekend.

Could the polo match be the moment they publicly end rumours of a feud?

Today The Duke of Cambridge and The Duke of Sussex are taking part in the King Power Royal Charity Polo Day for the Khun Vichai Srivaddhanaprabha Memorial Polo Trophy.

The charity match is helping raise funds and awareness for charities supported by Their Royal Highnesses. pic.twitter.com/9ziCa0pN9G

Are you a fan of the Royal Family? Leave us a comment on our Facebook page @EntertainmentDailyFix and let us know what you think!