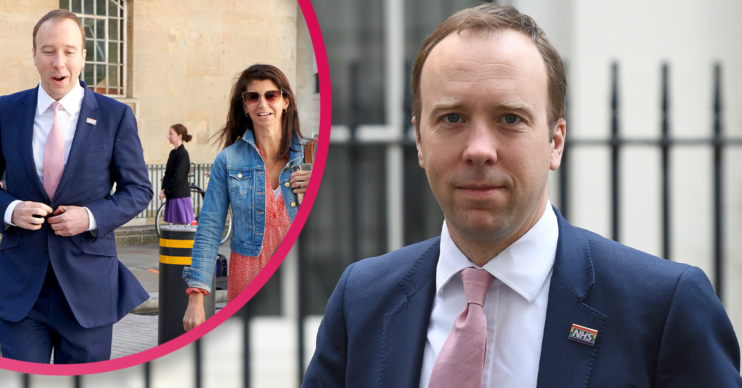 Comes after he stepped down as Health Secretary

The latest Matt Hancock news suggests the disgraced MP is planning his next career move because he needs more money “to fund his new life”.

Hancock was caught breaching social distancing guidelines last month when he was seen smooching aide Gina Coladangelo outside his office on CCTV.

He has since left his wife Martha, while Gina has been seen out without her wedding ring.

According to the Daily Mail, Hancock has no intention of quitting as an MP.

This comes after his resignation at Health Secretary.

Instead, it’s claimed that he’s asked current and former ministers on advice for how he can fight back after quitting the role.

One political friend claimed: “Matt will not be quitting, and will prove himself to be a great backbench MP.”

So what’s next for Hancock?

Although some say the damage he’s done is too great to stay on as an MP, he isn’t expected to step down.

Some have warned that he will struggle to fund his new life, though, on an £86k backbench MP’s salary.

It’s thought he would struggle to get outside jobs to supplement his income.

And one pointed out that he’ll need to earn more money now to “fund his new life”.

“Given the notoriety which he has now achieved, it will be impossible for him to find new jobs without declaring them in the MPs’ Register [of Interests]. That will drag the companies reluctantly into the limelight,” said one.

Earlier this week, Hancock returned to social media for the first time since stepping down as Health Secretary.

He posted a retweet after England’s win against Denmark in the Euro 2020 tournament.

It read: “YESSSSSSSSS!!! The #ThreeLions are EURO finalists for the first time!”

He was also seen out in his car in an image circulated on social media.

Head yo our Facebook page @EntertainmentDailyFix and tell us what you think of our story.