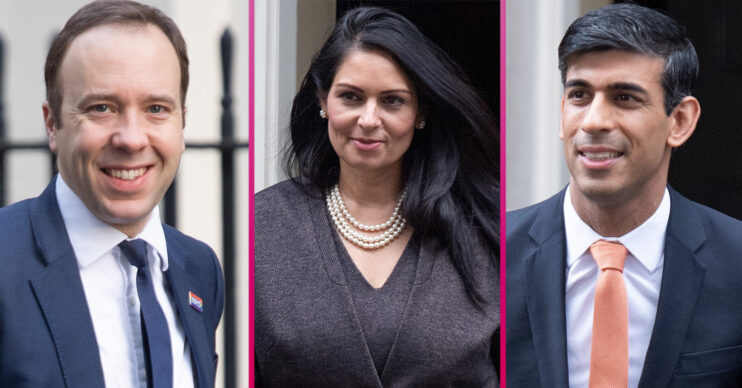 Matt Hancock and six other MPs we secretly fancy

Matt Hancock is currently caught up in a kissing scandal after he was pictured on CCTV sharing an embrace with advisor Gina Coladangelo.

Over the past year, the Health Secretary has had people talking for his and the government’s handling of the COVID-19 pandemic.

But that wasn’t just what everyone was talking about, as many people admitted having a little crush on the MP after seeing him on various TV interviews and press conferences.

And we have to admit, he’s on our list too with some other politicians that we secretly fancy…

Mr Hancock, who has issued an apology over the kissing scandal, is on our list of secret crushes.

The 42-year-old has been working on helping the country overcome the Covid pandemic over the last year – with some thinking he’s done a good job and others thinking he hasn’t (AKA Piers Morgan!).

But following the recent kissing scandal, will Mr Hancock lose some of his admirers?

During the pandemic, the Chancellor of the Exchequer has had his fair share of admirers with some people even branding him “Dishy Rishi”.

And yes, we are one of them.

Mr Sunak’s generosity and handling of the pandemic has won over many people and therefore bagged him that nickname.

Our third secret crush is Leader of the Labour Party Keir Starmer.

We don’t know if it’s the silver fox look or his leadership, but Mr Starmer definitely floats our boat.

And he won us over even more with his appearance on Piers Morgan’s Life Stories earlier this month.

He showed his emotions as he spoke about his mother’s death as well as sharing personal details of his life.

The First Secretary of State and Foreign Secretary has also been present throughout the COVID-19 pandemic, offering advice and updates.

Many people have admitted to having a secret crush on Raab following his appearances on TV.

We think it’s the suits which do it for us…

Now, the Prime Minister is a very Marmite choice but he’s made our list.

Boris Johnson seems to get many admirers and he was even named as one of the nation’s guilty crushes!

He beat the likes of Johnny Vegas, Jack Black and Ricky Gervais to finish third in the list.

Even Gemma Collins admitted having a crush on the PM.

Home Secretary Priti Patel is the next politician who made our list.

It seems she’s gained some admirers throughout the pandemic thanks to her straight-talking ways.

Read more: Who is Matt Hancock’s wife? How long have the Health Secretary and Martha been married?

She even made Buzz Bingo’s list of the top 10 ‘unlikely’ celebrity crushes.

Ms Patel made second place, beating the likes of Shirley Ballas and The Chase’s Jenny Ryan!

Finally, he may not be an actual politician but Hugh Grant as the Prime Minister in Love Actually made our list.

Hugh is a heartthrob anyway, but we just loved him as the PM in the hit romantic drama.

We think it was that infamous dance in Number 10 which got us all flustered!

What has Matt Hancock said about the kissing scandal?

In a statement, the Health Secretary said: “I accept I breached social distancing guidance in these circumstances. I have let people down and am very sorry.”

He added: I remain focused on working to get the country out of this pandemic and would be grateful for privacy for my family on this personal matter.”

Do any of these MPs make your list? Head to our Facebook page @EntertainmentDailyFix and tell us.