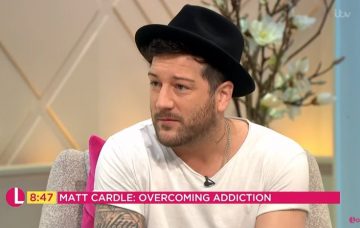 Matt Cardle is “strangely thankful” for his pain and struggles

The singer is back with new music after overcoming addiction

Former X Factor winner Matt Cardle has spoken of his journey from a dark place after winning the competition to finding love and releasing a new album.

The singer-songwriter, who won the seventh series of X Factor, has spoken candidly about how he turned to alcohol and pills to cope with fame following his 2010 win.

But appearing on ITV’s Lorraine on Friday, after releasing his brand new music, he said: “I wouldn’t be here if it wasn’t for everything that’s happened, so I’m thankful for everything.  I don’t regret a thing.

Matt has said in the past he was lucky he didn’t die during the height of his addictions.

His problems started after winning X Factor and suddenly being thrust into the national limelight.

He told Lorraine: “A show like that and the size it was at the time rocks you. It rocks people even if you just get to the live shows. It’s such an experience. Unprecedented numbers, so it takes a long time to steady yourself after something like that.

“It’s quite backwards. So many people knew who I was but I hadn’t even put a record out yet. It was so backwards and it took a long time to find my feet and steady myself. and this really is the album I’ve always wanted to do.”

“That’s why my new album is called Time To Be Alive. It’s from being through rehab and talking about everything and realising you can’t run from the things that hurt – you have to face up to life.

“I did three albums in three years that were very much heartbreak albums, and  Ididn’t want to do that again. I’m weirdly glad for the fact I went to that dark place because behind a lot of artists, so much art, is struggle and pain.

“I’m strangely thankful for that pain and being able to pour it back into the album.”

Lorraine pointed out Matt also has “the love of a good woman” these days.

He laughed: “She’s wonderful! She’s absolutely wonderful. We stopped going out as much. When you’re in a relationship it keeps you from being a bit of a bad boy!”

“She’s been great. Ever since the show she’s always been there supporting me. She definitely was one, if not the only mentor who took that role seriously. And if you get along with someone you will stay in touch. And we did get on well.”

Matt’s new album, A Time To Be Alive, is available now, alongside new single Desire.

Are you looking forward to Matt’s new music? Leave us a comment on our Facebook page @EntertainmentDailyFix and let us know what you think!