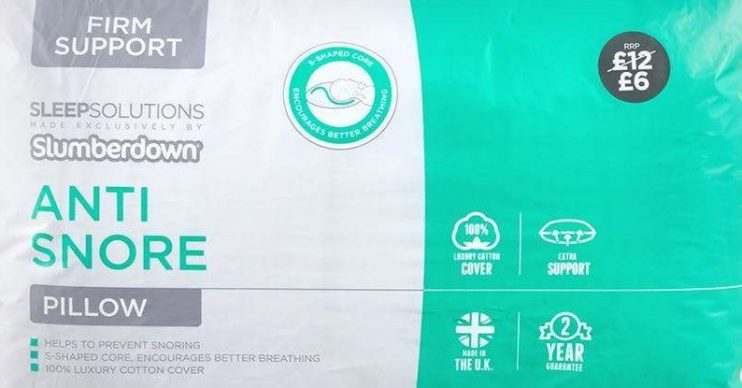 For those with a partner prone to snoring, bedtime can be the single most stressful time of the day.

You lie there, wide awake, seemingly for hours, as your other half starts heavy breathing – something which more often that not turns into farmyard-like snoring.

Now, however, The Sun reports that one woman has found something that actually works to stop snoring.

Read more: Enjoy dinner cooked by a celebrity chef and pay only what you think it’s worth

Matalan’s Slumberdown Anti-Snore Pillow has not only saved her marriage, but her husband’s life by the sounds of it too!

This is a bargain if you are ready to suffocate your partner in the night.

She said: “This is a bargain if you are ready to suffocate your partner in the night. £6 from Matalan!”

She added: “I bought it, not expecting it to actually work, and I can’t believe it does! Best £6 I’ve ever spent!”

In news that means she’ll also remain out of prison, the woman added: “And my husband is still alive.”

However, before you get too carried away, at the time of writing, the pillow was sold out online.

You might find one in store, or Asda has a similar one in stock.

It’s £1 more, but we think that’s a small price to pay for a restful night’s sleep!

Head to our Facebook page @EntertainmentDailyFix and let us know if the pillow has worked for you!