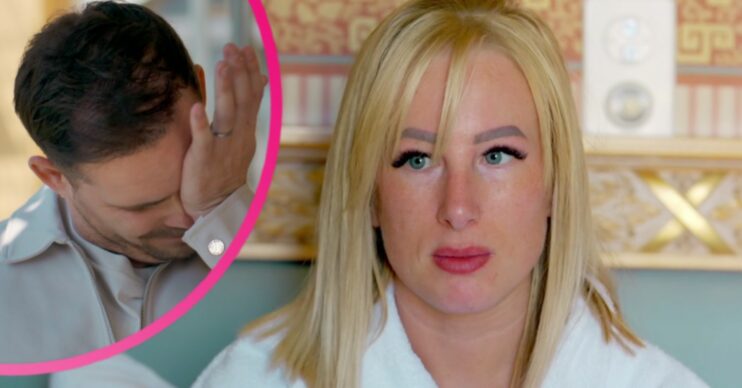 The newlyweds headed to Switzerland on their honeymoon

The popular E4 reality series returned this week, as 16 singletons geared up to marry complete strangers.

During last night’s episode, Morag and Luke headed off on their honeymoon after a whirlwind wedding day.

The newlyweds headed to Switzerland on a romantic getaway.

However, things appeared frosty between the two.

Morag initially complained over the location, before coming clean about her feelings towards Luke.

During an awkward breakfast chat, she said: “You’re lovely but I need more man than boy.”

Luke responded: “To be called not a man is a low blow. To me being a man is being loyal, having your back supporting you.

“I wanted someone to like me for who I am.”

Morag then explained that Luke wasn’t her usual type.

She continued: “I spend a lot of time around people who care about what they actually look like. I literally go for the same type of guy all the time, I go to the gym everyday and surrounded by all these gym bods.”

The conversation clearly upset Luke, as he teared up in a separate chat.

Despite the uncomfortable start, the couple’s trip took a huge U-turn.

Morag later chose an outfit for Luke before he surprised her with a romantic dinner.

Morag comment on Luke’s “manliness” was completely uncalled for #MarriedAtFirstSightUK

Watching Luke and Morag is so hard. The guy shouldn't be changing who he is and what he's comfortable in, after only a few days, just for her. #MAFSUK

Another raged: “Watching #MarriedAtFirstSightuk blimey, where did they find these self-obsessed, belittling women. Morag was the worst! #MAFS.”

A third shared: “Watching Luke and Morag is so hard. The guy shouldn’t be changing who he is and what he’s comfortable in, after only a few days, just for her. #MAFSUK.”

A fourth wrote: “I know Morag has been through stuff but so have most people, doesn’t mean you deserve any more or less than anyone else or have free pass to make someone feel like [bleep]. Luke deserves better. #MarriedAtFirstSightuk.”

However, one viewer appeared optimistic.

They said: “Morag and Luke are a weird one, Luke is such a lovely guy and maybe the one to show her it’s not all about looks and clothes.”

Following the episode, Morag took to social media to address the scene.

It came after a viewer told her: “You made him cry, that was horrible to watch. What a genuinely nice guy he seems… these poor guys with their matches this series so far.”

Replying to the comment, the bride said: “Tell me about it. He really is a genuine nice guy! An absolute gentleman and a man! But we grow and we learn.”