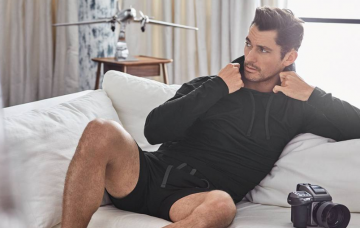 David Gandy has revealed he’s become a father for the first time.

The 38-year-old model has announced via his Instagram account that his girlfriend, barrister Stephanie Mendoros, gave birth to a baby girl named Matilda last week.

Alongside a photograph of his baby snuggled up in his arms, David wrote: “Daddy, Dora and new addition Matilda out for our first dog walk together this morning.

Daddy, Dora and new addition daughter Matilda out for our first dog walk together this morning. Gorgeous Baby Matilda was born last week, both mother and baby doing incredibly well. Only worrying thing is I’m now totally out numbered by females in my house!

Fans rushed to congratulate the couple, with one person writing: “Wonderful news! Congratulations to all.”

Another said: “Congratulations to the Gandy family. Another girl in your life.”

At the time, he quipped to the Daily Mail: “I think we’re going to need a bigger car.”

The catwalk hunk – who has been dating Stephanie for two years – admitted they were determined to keep the sex of their baby a secret.

He added: “We’re expecting our first in November. We’re both thrilled. Absolutely delighted. It’s our first. It’s all very new to us. We’re taking every day and week as it comes. It should be fun. We don’t know I it’s a boy or a girl and we’re not planning to find out.”

Prior to the arrival of baby Matilda, David suggested he hoped to have a big family one day.

The British star revealed that his sister had a big family of her own and that he relished spending time with his nieces and nephews.

He shared: “My sister has five children. So I have five nephews and nieces. We have great fun together bouncing around on the trampoline when I go to visit them … They all want to play. I’ve seen them growing up. It’s a great family.”

Leave your congratulations for David and Stephanie on our Facebook page @EntertainmentDailyFix!