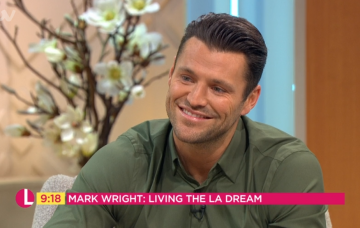 He said he's going to be covering the royal wedding

Mark Wright has revealed he’s back in the UK for a while to cover Prince Harry and Meghan Markle’s wedding on Saturday.

Mark has been living the LA dream for the past year after landing a presenting job on American entertainment show Extra.

And now his role on the show will see him covering the royal wedding this weekend.

Mark revealed: “This week we’ve [the Extra team] been interviewing people, we did Piers Morgan today because he’s always got a great view on everything.”

Explaining what he’ll be doing on the actual day, Mark said: “We’re going to be at the venue on Saturday and Friday just picking up fan reaction.

“The royals in America are so huge I never even realised, they’re bigger there then they are here.”

Mark added that he knows exactly what the couple are going through.

Speaking about his wedding to his wife Michelle Keegan, Mark said: “It was amazing. I’m just looking at what Meghan’s going through now.

“There’s so much stress, the planning, and the family causing the stress.”

He also spoke about the news that Meghan’s father Thomas Markle is reportedly unlikely to be attending his daughter’s big day.

“I feel so sorry for Meghan and her dad – and now’s he’s unable to attend the wedding,” Mark said.

“That was probably one of the most important things for Michelle, what song she was gonna dance to with her dad on the day. She cried and he cried.”

It’s been reported that Thomas has said it’s unlikely he will attend the royal wedding due to a planned heart procedure after suffering a heart attack recently.

The 73-year-old has apparently claimed he needs surgery and will be admitted to hospital on Wednesday morning (May 16), meaning he may not be able to fly to the UK for the nuptials.

TMZ quoted Thomas saying: “They [doctors] will go in and clear blockage, repair damage and put a stent where it is needed.”

Kensington Palace has not yet commented.

Earlier this month, the palace announced that Thomas would be giving his daughter away at the wedding.

But Thomas announced on Monday evening (May 14) he would not be going, amid allegations he had worked with a picture agency to pose for staged paparazzi photos.

His daughter Samantha, who is Meghan’s half-sister, has since said she instigated the deal as she wanted to portray Thomas in a good light following unflattering paparazzi images.

But then, he appeared to change his mind, saying he didn’t want to miss out on his daughter’s special day.

The latest update is that Thomas said he won’t make the wedding because his health is a priority.

Meanwhile, preparations for the wedding are well under way with just three days to go.

Meghan and Harry will marry at noon at St George’s Chapel at Windsor Castle.