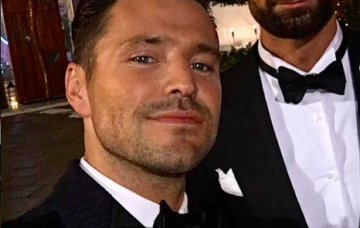 He's given up his American dream... for now

Nobody really expected a reality star from The Only Way Is Essex to become a huge star in America, but Mark Wright did it.

But now – according to a shock new report – the Hollywood showbiz reporter for Extra has quit his job, so he can start a family with wife, Michelle Keegan.

Speaking to heat magazine, the 32-year-old said: “It just feels like the right time to come back and live here with my wife and family.”

And sources add that he’s quit his dream job – interviewing the A-list – because he wants Michelle, 31, to “give him the baby he’s always wanted. It’s costing him personally around £500,000 to throw in the towel. This could be career suicide for him, all because he’s desperate to have kids.”

But the insider adds that the Our Girl star isn’t quite so ready to give up on her work just yet, saying: “Mark may have sacrificed his career, but that doesn’t mean Michelle is prepared to drop everything to start a family.”

Mark moved to LA in 2017 to take on the red carpet job, but has recently spent more time in the UK and in South Africa, filming the new Channel 5 dating show The Bachelor.

The pair – who married in 2015 – have recently been enjoying a skiing holiday together.

The former Coronation Street star posted a snap of her basking in the sun in a deckchair to Instagram – and the only mountain she was tackling was the one made of whipped cream on top of the humungous hot chocolate she was enjoying!

She sarcastically captioned her pic: “An hour in of being absolute pros…” Michelle was taking a snowy break away with Mark and some pals and she seemed to be loving it so far.

Clearly this was something to do with the indulgent “pit stop” they had made as she joked that “heaven touched” her lips.

Mark also seemed to be enjoying their time away. He shared a photo of them on the slopes making the “best memories,” as well as a hot, topless shot of himself.

You have to admit – these two would make such beautiful babies. Maybe this skiing trip is a babymoon…!

Do you think Mark will get the family he’s after? Leave us a comment on our Facebook page @EntertainmentDailyFix and let us know what you think.