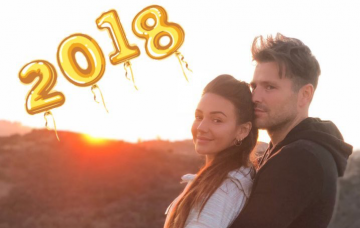 Couple are currently together in LA

Mark Wright shared a series of adorable shots to Instagram as he saw in the New Year with wife Michelle Keegan in LA.

The pair were recently reunited after eight months apart, and seem to be enjoying their time together.

The former TOWIE star has been working in LA as a presenter on entertainment show, Extra.

Read more: Has Michelle Keegan just dropped a HUGE hint about her marriage?

His commitments in the States meant that he couldn’t be with Michelle as she travelled across the globe filming BBC drama Our Girl.

They were reunited just before Christmas as filming on the third season of the military drama wrapped.

Mark took to Instagram to welcome her back, saying: “Done. 8 months away from home, away from loved ones. @michkeegan you amaze me more & more every day.”

He then posted more shots to Instagram stories, including the couple’s midnight kiss.

The pair have been packing their schedules with time together since their reunion – they took survivors of the Manchester bombing to Disneyland Paris, shopped together in London, and spent Christmas in Essex with Mark’s family.

There are reports that Michelle is planning to stay with Mark in LA, with The Sun Online claiming Michelle has cleared her diary from December onwards.

Is the British beauty looking to move her own career stateside while she’s there?

After hinting that Our Girl will be finishing after its third season, it’s possible Michelle has Hollywood in her sights.

Whether or not the pair will be settling down together in LA, they seem to be enjoying the time they have now.