Mark Wright and Michelle Keegan are reported to be adding a 'nanny flat' to their home.

And according to Mirror Online, the potential home improvements could indicate the TV couple are considering starting a family.

The Sun reports Mark and Michelle have submitted plans to Epping Forest District Council for a one bedroom annexe.

It is claimed they have applied for permission to knock down stables at their £1.3million home to make way for the development. 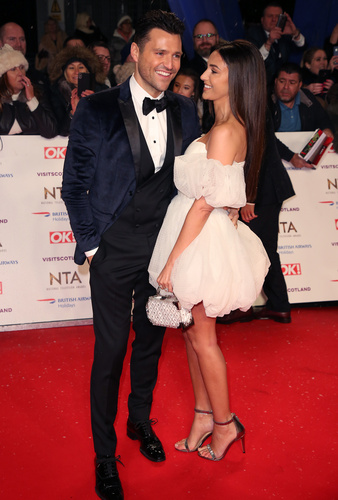 The newspaper also reports Michelle and Mark brought the property last October and hope to create their dream home.

It is also claimed plans to build a two-storey "family home" with a loft conversion were approved last month.

We definitely do want children in the future.

The Sun claims the possible inclusion of a playroom "has fuelled rumours that they're planning on children soon".

And Mirror Online goes on to speculate a 'flat' "could be the perfect space for a live-in" child care provider.

ED! has contacted representatives for Mark and Michelle for comment.

It is believed the ground floor will also include a TV room, gym, bar area and study.

Provision for an outdoor swimming pool is also said to be among the plans.

'Everyone always asks that question!'

Our Girl star Michelle admitted last year her mum has been asking the couple about grandchildren.

Michelle said during an appearance on Thew Jonathan Ross Show that she and Mark were not planning on children "yet".

"Everyone always asks that question!" she replied.

"Don't get me wrong, I'm not getting any younger."

She added: "My mum is on it as well. No plans yet, but we definitely do want children in the future."

Michelle and Mark have kept their social media fans entertained with regular broadcasts during the coronavirus lockdown.

However, Michelle nearly revealed a little too much as she risked flashing fans!

Mark also almost gave too much away during a recent episode of I’ll Get This.

The former TOWIE cast member may not get much thanks from Michelle letting slip a story about her 'farting'!