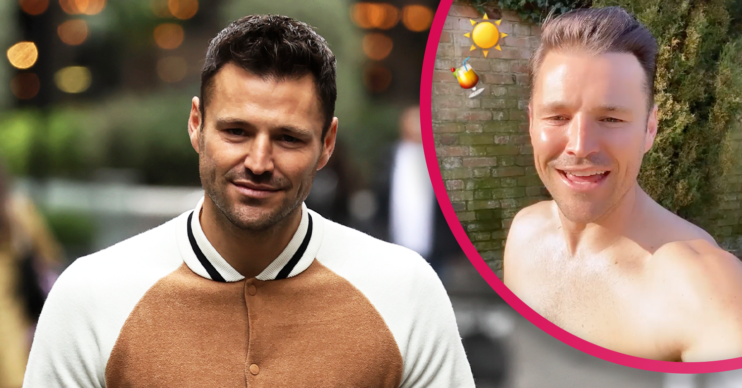 If you've got it, flaunt it

Mark Wright has delighted his Instagram followers by posing naked on the social networking site.

Not only that, buff Mark also joked about the size of his huge manhood in the post.

His followers flooded the comments section with fire emojis.

And one even said that he was a “gorgeous human being”.

Mark got his kit off to promote his new book Get Fit Get Healthy Get Happy.

And the beaming star most certainly looks to have been following his own advice.

Holding a giant copy of the book in front of his privates, Mark was full of the joys of spring.

He captioned the shot: “I promise this shot was supposed to be fully clothed – the sun made me do it!!”

Mark added: “But I had to cover the little fella with a giant version of my NEW BOOK, the standard size just didn’t quite cut it.”

I had to cover the little fella with a giant version of my NEW BOOK, the standard size just didn’t quite cut it.

“D’ya know what? If you’ve got it, flaunt it and you’ve worked hard for that bod!” said another.

‘Michelle is a lucky lady’

Other Mark fans commented on how “lucky” his wife Michelle Keegan was.

A sex symbol herself, Michelle doesn’t appear to have commented on Mark’s picture.

However, she wasn’t far from many fans’ minds.

“Michelle is a very lucky lady!” declared one of them.

“Your wife is a lucky lady,” said another.

Mark strips to his pants

Not content with stripping off on his grid, Mark also stripped to his pants and posted it on his Instagram Stories.

We imagine yesterday’s sunshine “made him do it”!

He filmed himself in his tight black Armani trunks and said he’d been sunbathing while treating himself to a couple of cocktails in the garden.

What do you think of Mark stripping off? Tell us on our Facebook page @EntertainmentDailyFix.