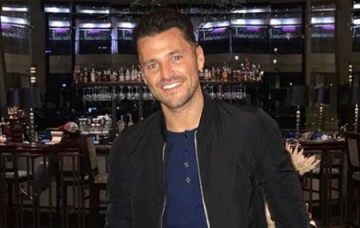 Mark Wright’s agent has denied he is keen to finish his stint working as a showbiz reporter in L.A. so he can start a family with his wife Michelle Keegan.

The former TOWIE star has been living in America interviewing A-listers since 2017 after landing the dream job for TV show Extra.

He’s managed to sustain a long-distance relationship with Our Girl actress Michelle during that time, with both frequently having to deny they are on the verge of splitting because they spend so much time apart.

Now Mark’s rep has had to pour cold water on claims that he has asked his NBC bosses to relieve him of his “gruelling filming schedule” so he can live in the UK again and have a baby.

According to the Daily Star, Mark has asked to leave L.A. and instead become a European contributor for the show.

The insider revealed: “He is heading home and the next step will be when to start a family.”

Their US-based TV source added: “Wrighty’s done well in the US and has become a popular face. He was well liked by viewers and the show executives rate him.

“But he has found that success tough to balance with being away from his wife and has now decided to head home.

“He and Michelle did well to stay so strong during this time apart, but doing it again would be tougher.”

However, Mark’s spokesperson told The Mirror there was no truth to the report.

Both Mark and Michelle have previously stated they aren’t yet ready to have a baby – although it is something they both want eventually.

“We’re not talking about when that’s going to be yet. We’re not even planning when that could be yet. We’d both love to be parents but there’s no plans for it whatsoever.”

Michelle, 31, previously revealed to Women’s Health that she’d like to have four children when the time is right.

She said: “We’ve not planned anything and realistically nothing can happen right now because I’m too busy.

“But I’ve always been broody. I love kids and I want four, so hopefully in the near future.”

Do you want Mark to return to the UK? Leave us a comment on our Facebook page @EntertainmentDailyFix and let us know what you think!