Mark Wright and Michelle Keegan have put on a defiant show of togetherness after his ex Lauren Goodger branded their marriage "really weird".

Speaking last week, Lauren revealed to Heat: "I saw them both in the gym. They don't talk. It's really weird. I was like: '[Bleeping] hell, we weren't like that.'"

She added: "It's like they don't know each other. I'm just so glad that ain't me."

Back in 2014, seemingly sick of Lauren's jibes, Mark defended his relationship with Michelle in a tweet, which saw him tell Lauren to be a "proper woman".

However, now he seems happier to let actions speak louder than words.

Read more: Cheryl is 'sick of being targeted over her weight' as body-shakers brand star 'too thin'

After giving up his job in the States to come home to the UK so he could spend more time with his beautiful actress wife, Mark and Michelle have jetted off on a sunshine holiday.

The pair are in Ibiza and appear to be having a whale of a time, watching Calvin Harris at Ushuaia, attending beach parties and looking loved-up and happy.

Taking to Instagram, Mark posted a picture of himself and Michelle enjoying a pool party.

Read more: Coleen Rooney wants to 'rebuild her career and have fifth baby with Wayne'

Cuddling up together, he captioned the shot: "IBIZA with my no1." 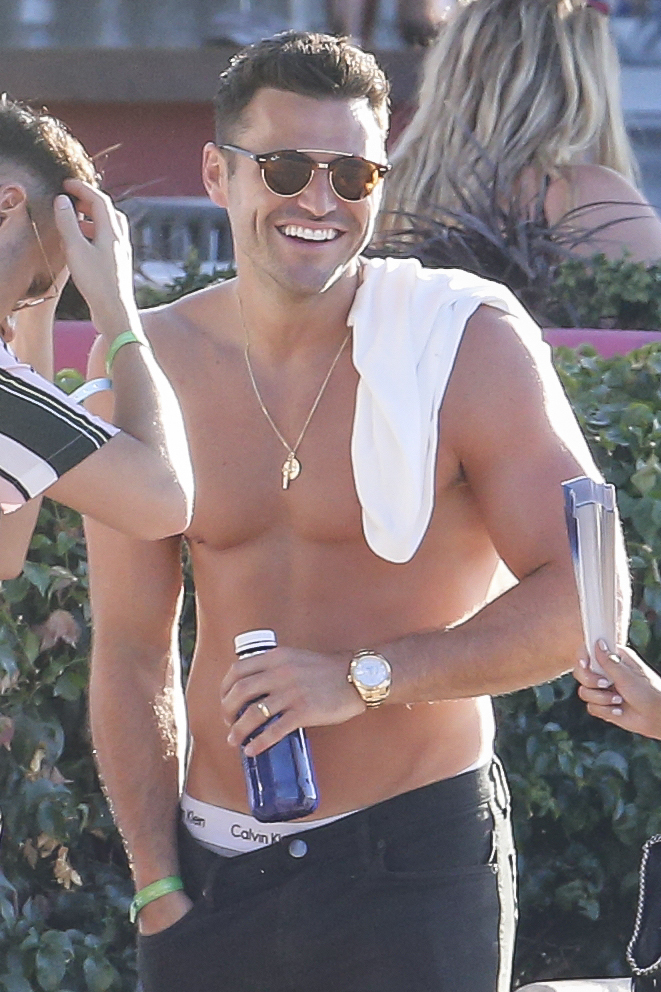 Mark quit his job in the States to move back to Britain to be closer to his wife, now the pair are enjoying a holiday (Credit: Splash News)

Others referenced Lauren's comments and joked: "How do you arrange a picture when you don’t even speak? Jeez!"

The pair haven't been pictured together for months, but Michelle recently revealed why they don't post lots of pictures of themselves to Instagram any more.

I know there’s interest but I just thought, I’m not feeding it any more. By stopping that, we’ve taken back control. Massively.

She told Fabulous: "I know there’s interest but I just thought, I’m not feeding it any more."

Michelle was spotted at a beach club, where she also posed for a picture with Mark (Credit: Splash News)

She added "And by stopping that, we’ve taken back control. Massively. It was relentless every week – especially because we lived away from each other."

Mark can currently be heard on our airways every Saturday night on his new Heart radio show.

The One Show: Alanis Morissette stuns viewers with pre-watershed 'F-bomb'