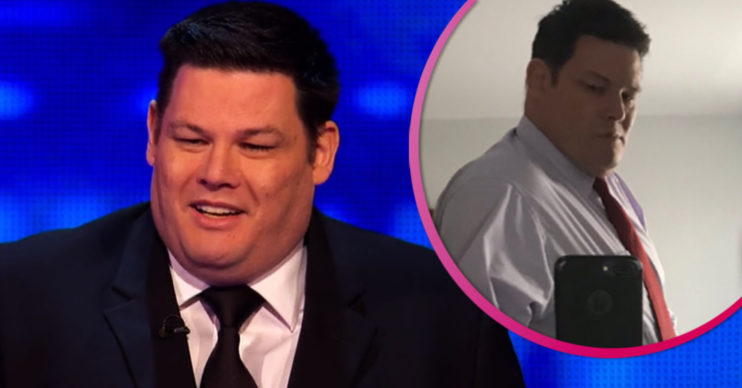 Mark revealed his trousers are too big for him

Mark Labbett has wowed fans by showing off his impressive weight loss.

The Chase star shared a photo to Twitter on Tuesday showing himself wearing a pair of trousers which are now too big for him.

What did Mark Labbett say?

Mark, who is known as ‘The Beast’ on The Chase, wrote: “Lost a bit of waistline, still a long way to go #skinnybeast #doubletwoshirts.”

Fans were stunned by Mark’s transformation.

One person tweeted: “Well done Mark and fair play to you, keep meaning to do it myself but my willpower is non-existent.”

A third added: “Wow that is an amazing achievement. I hope you are really proud of yourself. Keep going Sir, keep going.”

At the time, the quiz expert posted an image to Twitter, which showed the 6ft 5in star holding a gigantic pie with ‘The Beast’ written on it.

Lost a bit of waistline, still a long way to go.

He joked in the image: “Only one pie for tea,” followed by a sad face emoji.

Meanwhile, Mark has previously explained reasoning behind his mission to lose weight.

He told Loose Women: “It was the diabetes.

“I’m waiting for my next check-up and I’m hoping the figures are going to be better.

Meanwhile, earlier this month, Mark showed off his a haircut to go with his new look.

Only one pie for tea 🙁 pic.twitter.com/jaD4U6KdZ8

He shared a selfie to Twitter and said: “My new go faster haircut.”

Another added: “The sensible hairstyle of a patriotic Brit, if ever I’ve saw one.

“Although the slight angle on that spiked fringe portrays a subtly rebellious side.”