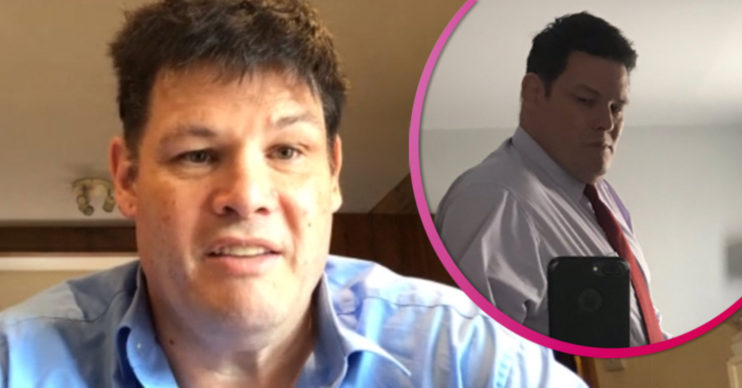 The Chase star was ill with coronavirus symptoms earlier this year

Mark Labbett has opened up about his incredible weight loss on Loose Women today.

The Chase expert insisted he didn’t try to lose weight, however, there were two weeks during lockdown that he “barely ate”.

Mark revealed he battled coronavirus symptoms back in February.

What did Mark Labbett say about his weight loss?

Mark said he had a “complete loss of taste and smell” and “no appetite”.

I think people are going to hate me, I haven’t actually tried to lose weight.

He added that he also suffered from “the cough, the fever and bouts of exhaustion”.

However, Mark said he just thought he had a “virus” and didn’t think it was COVID-19.

Mark explained: “For two weeks I barely ate, so at the time I was thinking, ‘result.’

“I’ve got some reserves on me, shall we say, so going a week or two with relatively little food is not a problem.”

He continued: “I think people are going to hate me, I haven’t actually tried to lose weight.

“What’s happened is, I had the brush with this virus, whatever it was, and since then I haven’t been going out.

“So I haven’t been having restaurant meals. And my wife works shift work, full time, so I’ve been the primary carer for our son.

“As many viewers will know, if you’re looking after an active toddler 14 hours a day, seven days a week, you haven’t got time to eat!”

When asked if he’s changed what he’s been eating, Mark said: “A little bit. I was 27 stone when I was diagnosed with diabetes in 2016.

“I was 23 stone at my last check up in March. Hopefully, when I get the next check up in a month or two, I’ll be a bit lighter than that.

“The major one is eating a bit more sensibly. I’m doing more exercise these days.”

Mark Labbett says he hasn’t been eating as much

He added: “I’ve just found I haven’t been that hungry. Here when I’m at home, there isn’t much food at the house so I’ll often miss lunch and have a decent breakfast.

“I just find there’s so much on my plate, so much to do, that I don’t have time to eat.”

Meanwhile, speaking about lockdown, Mark gushed over his young son.

He said: “It’s been great with him running around. He’s three-years-old now and he’s changing all the time.

“But he doesn’t seem to need as much sleep as other children.”

What do you think about Mark Labbett’s weight loss? Leave us a comment on our Facebook page @EntertainmentDailyFix and let us know.