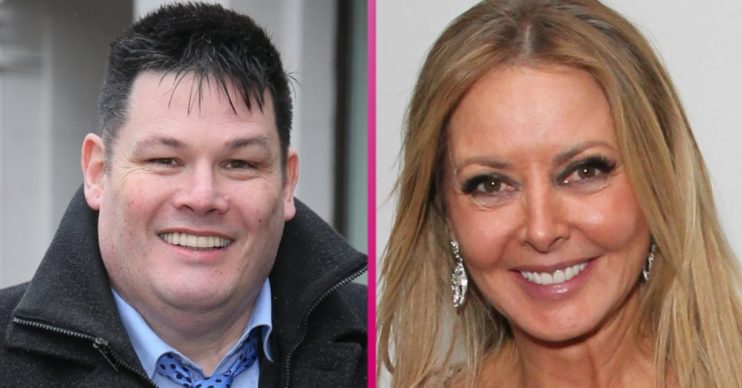 He's single and ready to mingle!

Mark Labbett has revealed he has been “getting on really well” with Carol Vorderman following his split from wife Katie.

The 55-year-old star of The Chase is a single man since his split from Katie last year.

And, having dropped a whopping 10 stone from his hulking frame, The Beast has revealed he’s interested in dating again.

How does Mark Labbett feel about his weight loss?

He told The Sun: “I’m now under 20 stone, and I am really feeling the difference, as well as seeing it.”

Mark also told the tabloid he is attracted to “smart women”.

He related how a previous chat with an unnamed star from TOWIE left him underwhelmed, even though he modified his conversation “to her level”.

Read more: Who is the smartest Chaser? Mark Labbett from The Chase claims he is!

But that experience hasn’t put Mark off dating a fellow celebrity entirely, it seems. And it appears he has a soft spot for another TV brainbox.

Mark continued: “But I will tell you who I’m getting on really well with, and we love having a chat — Carol Vorderman.”

What Mark Labbett likes about Carol

Declaring the former Countdown star to be “smart”, Mark suggested they find each other’s company fun as he compared their relative IQs of 154 (Carol) and 151 (his).

She looks fantastic, you’d never know she was 60.

Mark also noted he enjoys chatting with her and that they are both rugby fans.

He added: “She’s great fun to be with. She looks fantastic, you’d never know she was 60.”

Read more: Mark Labbett on Beat The Chasers: Is he still single after splitting from his wife?

However, Mark has ruled out dating any of his fans – despite ITV reportedly receiving 15 emails a week from admirers asking to be set up.

The quiz star emphasised how he has to be tactful and let them down gently when he turns such approaches down. That’s because he doesn’t want anyone developing an overwhelming crush on him.

Furthermore, he revealed he often suggests he’s too busy with his job to accept any such proposal.

Mark credits daily walks and having two meals a day for his huge weight loss.

A bout of coronavirus last year also spurred him on to increase his exercise regime.

He previously cut down the amount of sugar in his diet after being diagnosed with diabetes in 2016.

However, despite choosing to go to bed without having had an evening meal, the Toby Carvery fan – he has a card that entitles him to free food – has no intention of giving up roast dinners!