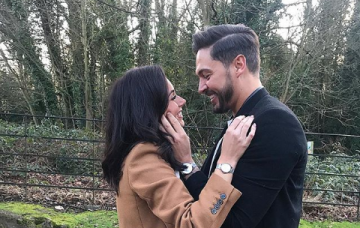 Mario Falcone announced he’s expecting his first child with fiance, Becky Miesner, earlier this week and has now uploaded a photograph of their baby scan on Instagram.

The former TOWIE star, 30, and Becky, 29, shared their happy news in this week’s OK! magazine.

Fans were overjoyed with this new post, sending their congratulations and well-wishes, telling Mario he will make the best daddy.

Others couldn’t help but speculate about the sex of the baby from the scan.

“Sneaky feeling it’s a girl,” suggested one, while another fan asked: “It’s a boy, right?”

Way to confuse the parents to be!

The most popular way to ‘guess the sex’ of the baby is to examine which angle the ‘nub’ is pointing. Called ‘the nub theory’, it refers to the little tube shape that appears in the genital area.

If the ‘nub’ is straight, or not pointing up more than 30 degrees, it’s thought to suggest a girl.

Becky revealed the couple had been trying to fall pregnant ‘obsessively’ last year, but they had panicked when ‘nothing happened’.

“We decided to stop for a bit, then a few months later I fell pregnant,” she told OK!

Mario added: “It was getting quite stressful, so we decided we needed to relax for a bit. But as soon as we went back to just having fun, she fell pregnant!”

Mario, who is already a doting uncle to sister Giovanna Fletcher’s two sons Buzz, four, and Buddy, two, and niece Summer Rae, said it has always been his dream to become a father.

“It’s been my dream to become a dad for a long time now, so I’m over the moon,” he said.

The gorgeous pair have been dating for nearly two years, and Mario proposed to Becky on holiday in Santorini last June.

The couple also carried on their ‘good news holidays’ this year, too, as they found out they were expecting while on holiday in Barbados in March.

They are thought to be planning two weddings – one in Italy with several members of Mario’s family, and one in the UK, with the most likely venue rumoured to be luxury hotel, The Savoy.

They had initially planned to wed this August, but have now put their big day back until next spring.

It’s not known exactly when the baby is due, but Becky is thought to be around four or five months pregnant, making her due date some time around August-September 2018.

Do you believe in ‘the nub’ theory? Can you predict the sex of Mario and Becky’s baby? Leave us a comment on our Facebook page @EntertainmentDailyFix and let us know what you think!