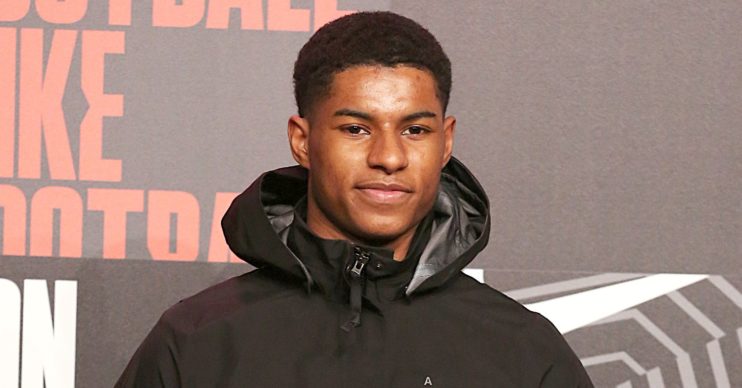 Marcus Rashford awarded for school meals initiative: Does he have a girlfriend?

He's already been awarded an MBE by the Queen

And who does he play football for?

Marcus Rashford This Is Manchester 2020 award

He accepted the ‘Supernova’ award for “his heroic efforts to shine a light on child food poverty”.

This Is Manchester 2020 recognises “people, heroes, places, organisations and communities that have shown resilience and true Mancunian grit and determination”.

Marcus said: “I’m honoured to receive this award and would like to thank those who have nominated me for it.

“This award demonstrates the power of working together to fight a common cause.

“So much more needs to be done though in the fight against child hunger.

“This award will help motivate me and those involved to continue our efforts.”

Fareshare’s Head of Development Miranda Kaunang said: “This year’s been like no other and you’ve helped us reach over 11,000 charities with really important food supplies.

“Most importantly, you’ve helped to change the future for millions of children in this country.”

The footballer campaigned for the government to allow about 1.3 million children to claim free school meal vouchers in England’s summer holidays during the coronavirus pandemic.

He then “respectfully urged” Prime Minister Boris Johnson to extend that scheme to support children during the October half term.

He asked Boris to extend the voucher scheme, as the furlough scheme came to an end and the UK faced increased unemployment.

More than a million people signed Marcus’ petition calling for children from poor families in England to get free meals in school holidays.

His Parliamentary petition says that “no child should be going hungry”.

Boris eventually agreed to extend the voucher system, thanks to Marcus’ campaigning.

It also promises an extension of the holiday activities and food programme to the Easter, summer and Christmas breaks in 2021.

Marcus has spoken openly about his own impoverished upbringing and admitted he would sometimes go hungry.

Marcus Rashford became an MBE in the Queen’s Birthday Honours list in October 2020.

He said the MBE was a “nice moment”.

He told the BBC: “I’m incredibly honoured and humbled.

“As a young black man from Wythenshawe, never did I think I would be accepting an MBE, never mind an MBE at the age of 22.

“This is a very special moment for myself and my family, but particularly my mum who is the real deserving recipient of the honour.”

He went on to say that “the fight to protect our most vulnerable children is far from over”.

Who does Marcus play football for?

Marcus makes up part of the England squad, alongside current players Harry Kane and Harry Maguire.

He also plays for Manchester United in the Premier League.

Marcus has been a Manchester United player from the age of seven.

He scored on his England debut in May 2016, becoming the youngest English player to score in his first senior international match.

This year, he reached 75 goals for Manchester United.

How old is Marcus Rashford?

He’s of Kittitian descent, with his grandmother being born on the island of Saint Kitts.

Marcus’ mum Melanie is a single parent, who raised Marcus and his four siblings alone.

Does Marcus Rashford have a girlfriend?

Marcus is in a long-term relationship with Lucia Loi.

Lucia is a 22-year-old PR account executive for the Manchester-based PR company, Sugar.

The couple prefer to keep their romance out of the spotlight, but have been pictured together.

Rashford and Lucia have reportedly been dating since 2016.

She has previously posted pictures of them together on social media.

Lucia was recently pictured on a WAG’s nights out with Rebekah Vardy.