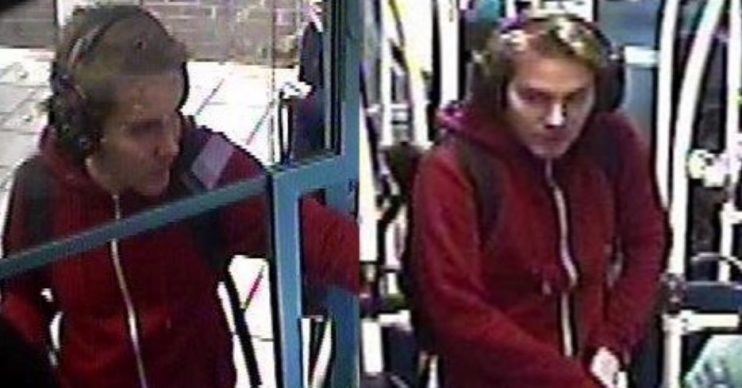 Cops have launched a search for a man who allegedly hit a crying baby on a bus in what has been described as a “truly shocking incident”.

CCTV images released by Bedfordshire Police show an individual wanted in connection with the assault wearing a red hoodie and headphones.

He is described as being a white man with short, light brown hair.

We would like to speak to the man pictured in relation to the assault of a child on Tuesday 4 February at around 2.50pm.

According to police, a man struck a 19-month-old baby girl on the back of her head and shouted at her.

The assault reportedly happened last month (February 4 2020) on the 29 bus travelling from the centre of Luton to St Margarets Avenue in the Biscot area.

We will not tolerate this kind of behaviour in our county.

The baby is said to have been in her pram with her mum right next to her.

PC Carolyn Hoare, investigating, said in a statement issued on the Bedfordshire Police website: “This is a truly shocking incident where a baby was assaulted on a bus in broad daylight. We will not tolerate this kind of behaviour in our county.

“We are asking the man pictured in the CCTV images, or anyone who recognises him, to come forward as we believe he could help us with our enquiries. If anyone witnessed the incident, please get in touch.”

A spokesperson said, as reported by The Sun: “We have issued CCTV images of a man officers would like to speak to in relation to the assault of a child.

“The incident took place on Tuesday, February 4, at around 2.50pm, on the number 29 bus from Luton town centre to St Margarets Avenue.

“During the journey, a 19-month-old child, who had been crying while in a pushchair next to her mother, was assaulted by being hit on the back of the head. The child was also shouted at.”

Anyone who has information on the incident is asked to either call the non-emergency 101 number or ring Crimestoppers anonymously on 0800 555 111.

Bedfordshire Police also has a reporting tool on its website, where anyone can give information on the alleged assault using the reference 40/7509/20.