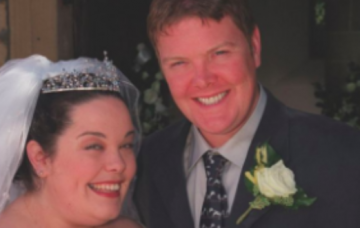 Emmerdale’s Mandy Dingle to return with BIG surprise for Paddy?

A secret child, anyone?

We already know that Chas Dingle’s going to get a big surprise in next week’s Emmerdale and now we’re wondering if it’s something really off the wall.

Like boyfriend Paddy’s ex wife Mandy arriving back in the village with his teenage child!

TV star Lisa Riley, who played Mandy in the show, has teased fans by declaring she’d love to come back to Emmerdale – or at least, she’d love her and Paddy’s child to rock up in the Dales.

“In my last episodes, Paddy and Mandy spent the night together,” she told Inside Soap magazine. “So there could be a mini-me knocking about.”

And she added: “I’d be much more interested to know what their child is like – and it’d give Paddy a shock!”

Lisa is now a presenter on Loose Women, and took part in Strictly Come Dancing back in 2012. Most recently she has written her own best-selling guide to healthy eating, after losing more than 10st in weight.

It has been said in the past that bosses have tried to tempt her back to Emmerdale but she’s not been interested – up until now that is!

Mandy left Emmerdale back in 2001, so any child she’d had would be well into their teens by now.

The arrival of a teenage Kirk would certainly be a big surprise for Paddy – and his girlfriend Chas (who, incidentally, is Mandy’s cousin).

We’ve heard that Chas gets some surprising news next week, and we’re wondering if the existence of a son or daughter for Paddy could be it?!

After all, Paddy and Chas are plodding along nicely at the moment. The Rhona issue has been dealt with sensibly and without drama, they’re totally loved up, and things are good.

And in soaps, that ALWAYS means something’s going to happen to stir it all up again.

Is there a new teenager heading to Emmerdale to cause trouble?

We really, really hope so!

Would you like to see Mandy and Paddy’s child in Emmerdale? Leave us a comment on our Facebook page @EntertainmentDailyFix and let us know what you think!