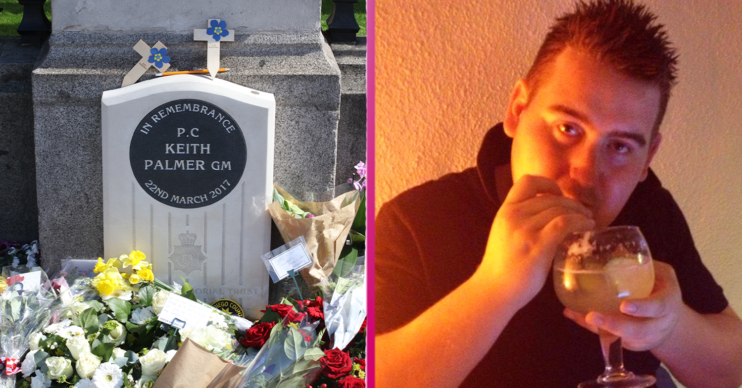 The man who was pictured urinating next to the memorial to fallen police officer Keith Palmer sobbed as he was jailed today (June 15).

He was pictured urinating next to the memorial during the “pro-statue” riots at the weekend.

PC Keith Palmer died in 2017 after being stabbed during the terror attack in Westminster.

Banks is said to have downed 16 pints during Friday night and Saturday morning and had not been to sleep.

His lawyer said he didn’t know where he was urinating and, in addition, wasn’t aware of the significance of the plaque.

However, Banks’ lawyer said his client was “ashamed of his actions” and suffers from mental health problems.

He handed himself in

Banks was confronted by his father and subsequently handed himself in.

As a result, he has today been jailed for 14 days.

The picture of the offence quickly went viral on Twitter, however.

Andrew Banks jailed for 14 days for urinating by the memorial to murdered PC Keith Palmer.
Banks said :”I didn’t know what the memorial was for. ”
He had drunk 16 pints on a bender before protests.
He said he’d gone to “defend statues” but “I wasn’t sure which ones.” ..🤦‍♀️

@LBCNews @pritipatel Andrew Banks sentence of 14 days in prison for urinating next to Pc Keith Palmer memorial is farcical. Two weeks… why even bother? He’ll be a hero to his drinking buddies. Unlikely to deter the likes of this chump in future.

His father David told The Sun: “Sometimes young lads get a bit desperate – Andy picked a stupid place to go to the toilet.”

He added: “He’s devastated and can apologise for being a stupid plonker. He was next to it, not on it. All the toilets were closed. However, it’s a silly thing to go and urinate on a public street.”

Mr Banks concluded: “But he’s not the first person to have done that and I don’t suppose he’ll be the last.”

Read more: Primark shoppers queue outside stores from 5am

Good Morning Britain host Piers Morgan was one of many to express outrage after seeing the image.

He said: “Beyond contempt… One of the thugs in London today to ‘save our country’ from people defacing memorials – caught urinating on the memorial for hero PC Keith Palmer who died as he tackled a terrorist and was awarded a posthumous George Medal.”

He’s not the first person to have done that and I don’t suppose he’ll be the last.

Banks has been branded a “national disgrace” on Twitter as a result of the incident.

“Excellent news that he has been made an example of #NationalDisgrace,” said one.

Beyond contempt…
One of the thugs in London today to ‘save our country’ from people defacing memorials – caught urinating on the memorial for hero PC Keith Palmer who died as he tackled a terrorist & was awarded a posthumous George Medal. 👇 pic.twitter.com/gYoylm0jXC

In addition, a third said: “‘He had been out drinking all night.’ WHERE? Aren’t all the pubs closed?”