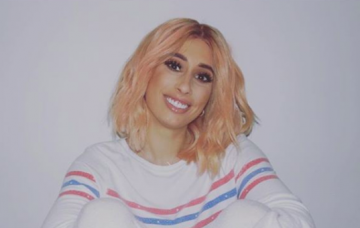 She is so funny

Stacey Solomon might be the best thing on the internet right now.

And her followers certainly think so, after her latest hilarious Instagram post, where she compared herself to a boy.

Beside a make-up free selfie, the Loose Women presenter wrote: “When you buy a hat thinking you’ll look like Avril Lavigne in her skateboarding boy-hating-hey-day and you end up looking like your little brother…”

Others complimented the I’m A Celebrity… Get Me Out of Here! winner for posting a picture without make-up, writing: “So real, what a role model… nothing fake about this beauty!”

On Sunday the X Factor finalist took to Instagram again, this time with a more glamorous shot, writing: “Happy Sunday!! 💛 😬😬😬”.

The brilliant selfies came after a dramatic appearance from Stacey on Loose Women last Thursday.

The reality star admitted she’s not a fan of the royal family, saying: “I don’t get any of it.”

The day’s panellists, including Christine Lampard, Linda Robson, Jane Moore, and Stacey were discussing the royals and how Meghan Markle could modernise the monarchy.

But Stacey, 28, disagreed, saying: “I just don’t get it, I don’t get any of it. I don’t get why we’re so obsessed with these humans that are exactly the same [as us]. It could be us four sitting there.”

Jane, 55, said the family are “becoming like celebrities,” but she added that “the Queen is brilliant”.

Stacey continued: “But I would work hard, too, if the whole country paid for me to have, like, 12 houses.”

Jane told her: “They don’t pay for all of the houses. We contribute about £39 million a year. It costs £300 million a year to run the royal family.

“But I’m with you. After the Queen I’d have them all on bicycles and living in a terraced house. But I love the Queen, I think she’s fantastic.”

But Stacey – who is dating actor Joe Swash – wasn’t convinced, saying: “It’s freezing cold outside and people are homeless and these people have houses to spare.

“And it does sometimes become a little bit frustrating because I don’t see the purpose of all of that money going to this entire family.”

Read more: Loose Women stars Nadia Sawalha and Kaye Adams admit they “couldn’t stand each other” when they met